Britain has a new prime minister.  Ireland has its worst nightmare.  The only question this week is how bad things are going to get for us. 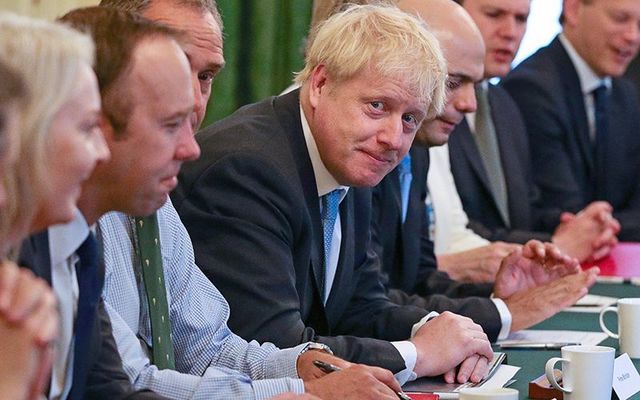 Britain has a new prime minister.  Ireland has its worst nightmare.  The only question this week is how bad things are going to get for us. The answer is probably very bad indeed.

Boris Johnson has little regard for the difficulties that Brexit will cause Ireland.  He has other priorities, the main one being to get the U.K. out of the EU without any further delay.  And he will be absolutely ruthless in achieving that no matter how much collateral damage it does in Ireland.

Just how unprincipled he can be is already clear from the cynical way he used the EU issue in the U.K. over the past few years to get himself into 10 Downing Street.  He did so even though on a personal level he was as indifferent about EU membership as most other people in Britain at the time. But he saw it as a political opportunity, so he kept stirring the pot.

He pursued his goal ruthlessly, firstly by leading the leave campaign to victory in the EU referendum, thereby getting rid of then Prime Minister David Cameron.

Having failed to be given the top job by the Tories at that stage, he then set about undermining the new Prime Minister Theresa May and her withdrawal agreement.  Now she is history as well.

So this week Johnson has achieved his dream.  He is the new prime minister.

The question for him is, what now?  He faces all the same difficulties that May had -- the Irish border backstop, an inflexible EU, a Parliament refusing to allow a no-deal Brexit, a divided Tory Party.

But Johnson does not do complications. For him, it's simple.  He won the prize largely because of his absolute clarity on Brexit, his promise that Britain will leave the EU by the new deadline date of October 31 whether there is a deal or not.

He made it the cornerstone of his campaign, a sort of backstop of his own.  He repeated the promise so often and so forcefully it is impossible to imagine him reversing it now.

He is demanding a new deal from the EU, one that drops the Irish backstop -- the insurance guarantee in the withdrawal agreement that would keep the U.K. under EU economic rules until another solution to avoid a border in Ireland can be found, no matter how long it takes.   Failing that, he says the U.K. will leave the EU without a deal at the end of October, around one hundred days from now.

Of course, Johnson also says he would prefer not to have to do a no-deal exit from the EU.  He is not very enthusiastic about the agreement which May spent over two years negotiating with the EU, although he seems to regard it as a possible basis for future talks.  But he is adamant that the backstop it contains must go because it could effectively trap the U.K. in the EU Customs Union for years to come.

The EU and Ireland's position is that any change to the withdrawal agreement will not be permitted, particularly any weakening of the backstop guarantee.  So we are in the old territory of unstoppable force meeting immovable object.   It's far from clear who will blink first and what will happen.

What is clear is that if nothing happens and neither side gives way, the U.K. will crash out of the EU without a deal on October 31. And despite everything the EU is saying that will mean a border in Ireland -- imposed by the EU.

So what hope do we have?   At this point let us spin the crystal ball and see if we can predict the future, or at least the next 100 days.

First off we will see the new prime minister sending his officials to Brussels in the next week or two to lay it on the line that there has to be changes to the withdrawal agreement.  That may or may not be accompanied by Johnson himself visiting a few of the EU capitals to impress the same message on leaders there.

With time running out, this may not be a fruitless exercise.  It's clear that the EU, despite being thoroughly fed up of Brexit at this stage, does not want a no-deal outcome either.

How far they will go to give Johnson something he can live with remains to be seen.  But already there are signs that they will at least try.

The newly elected president of the EU Commission Ursula von der Leyen said last week that she is open to the idea of giving the U.K. a further extension beyond October 31 to allow for more talks.  But Johnson is unlikely to take up this offer unless it is accompanied by clear indications that the backstop is up for negotiation.

The German Chancellor Angela Merkel also joined in last week, saying that if some other way can be found to avoid a hard border in Ireland, then the backstop in the agreement would no longer be necessary.  The problem is no one has been able to come up with such a magic formula so far.

Last week in an interview, Taoiseach Leo Varadkar went back to the earlier idea of confining EU regulatory alignment to Northern Ireland, meaning the rest of the U.K. would be free to make the global trade deals Johnson wants.  This more limited version of the backstop which would avoid a border in Ireland was initially favored by May until it was shot down by the Democratic Unionist Party.  They would do so again, of course, but they may not hold the whip hand over the Tories for much longer.

Johnson has a difficult balancing act to strike, given that there are a few dozen hardline Brexiteers on one side of his party, and an equal number of committed remainers on the other.  And in between, there are many who want to leave the EU but think no deal would be a disaster and will refuse to vote for it.

Whatever he gets from Brussels will have to please enough MPs to get through the House of Commons, a very difficult task as May found out to her cost.

If Johnson can't manage that and if Westminster votes down a subsequent decision by him to leave without a deal, then it will be stalemate.  In that situation, he may trigger a snap general election.

His arrival in 10 Downing Street will generate the usual euphoria surrounding any new prime minister, so that could be tempting.  And this temptation will be increased by the current disarray in the Labour Party and the weakness of its leader Jeremy Corbyn who is not seen as a viable prime minister.

If there is an election and Johnson returns with a majority, even a small majority, it would mean the end of the DUP having a veto over Conservative proposals for dealing with the Irish border issue.  So what Varadkar was suggesting last week could well be a possibility.

The problem for Johnson is that an election would inevitably become a second referendum on Brexit.  Despite a lot of people in the U.K. just wanting "to get on with it" and leave, recent polls show that the country is still split down the middle on the issue.  But the polls have also shown that the balance may have shifted slightly in the other direction so that the majority -- by a narrow margin -- may now be in favor of remaining in the EU.

Given that Johnson has achieved his dream of becoming prime minister, he may not care either way as long as he can stay in Number 10.   But doing that could be just as challenging as it was for May.   Already prominent ministers in May's government have resigned with the intention of leading a Conservative rebellion in parliament to prevent Johnson doing a no-deal Brexit.

Even with a crystal ball, predicting what is going to happen is impossible.  At the moment it looks like a car crash and it could get even worse for Johnson despite his sunny optimism.  But a compromise might still be possible.

The really frustrating thing is that such a compromise has always been available.  If the Irish government had accepted the idea of a five-year time limit on the backstop, the withdrawal agreement would probably have got through Westminster and we would now be in a lengthy transition period during which nothing would change.  There would be ample time to work out solutions.

Instead, the Irish government adopted an inflexible stance, insisting there could be no change to the backstop whatsoever.  They did so knowing that it was making it impossible for May to get the agreement through parliament.

And they are still doing it, even though we now have Johnson and a possible no-deal Brexit which would be disastrous for the Irish economy and would result in a border anyway.