Anne Anderson, an Irish ambassador who made a profound difference, steps down

Anne Anderson, Ireland's first female Ambassador to the US, is retiring after a distinguished diplomatic career. 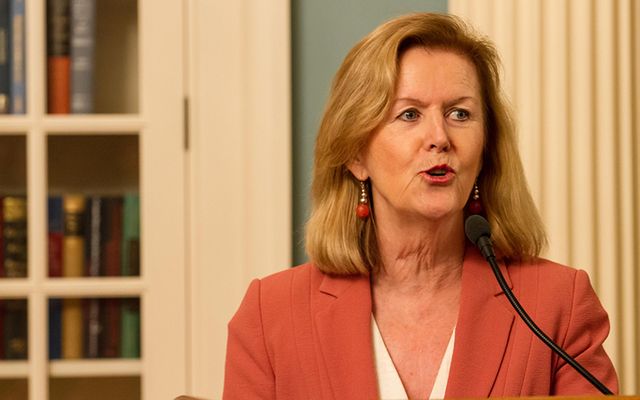 Ambassador Anne Anderson bid farewell to her Washington posting Tuesday and the caliber of people there to say goodbye was a reflection of her stature. Among them were Chief Justice John Roberts and his wife Jane Sullivan, Senator Pat Leahy, and members of several administrations. Also, there was Washington’s premier socialite Sally Quinn, Ambassador Elizabeth Bagley, Pulitzer Prize-winners Kevin Sullivan and Mary Jordan from the Washington Post, and the list went on.

As Burgess noted, Anderson was the ultimate ceiling-smasher and her extraordinary career ended in the most prestigious posting of all, at the Irish Embassy in DC.

Incredibly, she will be retiring looking at least a decade younger. She will be moving to New York eventually, after a well-earned vacation with her partner Dr. Frank Lowe

When she arrived in Washington in 2013 even President Obama took note. During his St. Patrick’s Day remarks he stated: “I want to extend a special welcome to Anne Anderson, the newest ambassador of Ireland to the United States.

“Anne is the first woman to hold this esteemed position . . .” — the crowd applauded, and Obama delivered his punch line — “. . . which means that they might finally get it right.”

Read More: New Irish Ambassador to the US leads the charge on immigration reform

Got it right they did. Anne Anderson was that rare combination: a diplomat who cared fiercely about Irish American issues such as the undocumented Irish as much as she worried about the social niceties of a diplomatic posting or what was happening in her realm back in Dublin.

She signaled early on her serious intent by gathering Irish American leaders coast-to-coast at the Washington embassy and listening to the concerns of the community. She encountered several undocumented Irish during that meeting and later remarked how deep an impression they made on her.

She never lost that common touch during her four years. Time and again she consulted the community on the immigration issue, and even when the reality of the fading hopes for immigration reform hit home she still used all her diplomatic skills to keep the community informed and to let them know her government cared.

We salute diplomat Anne Anderson @IrelandEmbUSA & record our thanks for her enormous contribution to Ireland's good standing in the world. pic.twitter.com/AflwpORIEE

Little wonder in her farewell speech she instanced the immigration issue as her one deep regret on leaving the post. She also talked about the extraordinary 1916 Rising centennial events held in the Washington DC area at the Kennedy Center, which she put enormous effort into. The creative talent on display during that festival was extraordinary.

Thus, she should depart with a clear conscience and a light heart knowing her time in America was incredibly well spent. As was evidenced by the outpouring by friends and colleagues on her departure, the Tipperary native will be sadly missed.

Read More: Dan Mulhall to be Ireland's next Ambassador to the US

'I don't think anything can quite match being Irish Ambassador to the U.S. You represent a small country but stand on the shoulders of 35m' pic.twitter.com/M5XGIuuW1x