Irish have received the respected US military Medal of Honor more than any other foreign country. 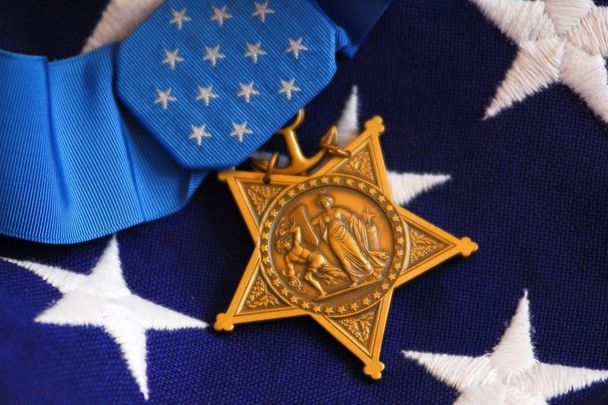 October 2, 2007: The Medal of Honor rests on a flag beside a SEAL trident during preparations for an award ceremony for Lt. Michael P. Murphy in Washington DC. Murphy was killed by enemy forces during a reconnaissance mission, Operation Red Wing, on June 28, 2005, while leading a four-man team tasked with finding a key Taliban leader in the mountainous terrain near Asadabad, Afghanistan. Getty Images

This Veteran's Day, Nov 11, we remember the huge number of Irish and Irish Americans who have served with valor in the United States military. We thank them for their service while remembering those Irish who have received the Medal of Honor.

The correct title for the US military award often called the “Congressional Medal of Honor,” is simply “Medal of Honor,” and those who receive it prefer to be called “recipients” rather than “winners.”

The Medal of Honor is the only US Military Award that is worn from a ribbon hung around the neck, and the only award presented by the President in the name of Congress. It is the greatest award given to American fighting heroes, and the Irish have received far more than those from any other foreign country.

As John Concannon, who contributed to research for the book "Medal of Honor Recipients 1863-1994," noted in a 2013 article for The Wild Geese, "Perhaps the most remarkable was 'super survivor' Michael Dougherty, from Falcarragh, County Donegal, a private in the 13th Pennsylvania Cavalry."

The Donegal man received the medal for routing a Confederate detachment at Jefferson, Virginia, which saved 2,500 lives by prohibiting the Confederates from flanking the Union forces.

Dougherty and 126 members of the 13th Pennsylvania Calvary were later captured and spent 23 months in different Southern prisons, including the Andersonville death camp in Georgia. He was the only survivor from his regiment.

His trials did not end there. As Concannon elaborates, Dougherty was heading for home on the steamship “Sultana” on the Mississippi River when the boilers exploded. Of the 2000 passengers, only 900 survived and Dougherty was again one of them.

Finally, after four years, the 21-year-old Union Veteran reached his hometown of Bristol, PA. This remarkable story is why Ancient Order of Hibernians (AOH) Division #1 of Bristol is called the Michael Dougherty Division.

Further AOH divisions are also named after Medal of Honor recipients. The Col. James Quinlan Division #3 of Warwick, in Orange County, NY, for example, is named for Col. James Quinlan, who led the Irish Brigade’s 88th New York in the battle of Savage Station, VA.

During the Civil War, 1,523 Medals of Honor were issued, with a large number presented to Irish troops from the Irish Brigade who fought at Fredericksburg and Antietam.

The exact number of Irish-born Medal of Honor recipients will likely never be known as Irish-born servicemembers sometimes listed their US addresses when enlisting.

However, of the 33 different countries listed as birthplaces of Medal of Honor recipients, Ireland, with at least 258 recipients, has by far the most.

Some of those 258 who listed Ireland as their place of birth included their county of origin. Cork has 19 Medal of Honor recipients, Tipperary and Dublin each have 11, Limerick has 10, Kerry 8, Galway 7, Antrim and Tyrone 6 each, while Sligo and Kilkenny each have 5.

19 individuals have received the Medal of Honor twice, and five of them were born in Ireland. They are, according to Concannon, "Henry Hogan from Clare, John Laverty from Tyrone, Dublin’s John Cooper, whose name at birth was John Laver Mather, John King, and Patrick Mullen.

Some modern-day recipients of the Medal of Honor are:

John King, U.S. Navy, from Ballinrobe, County Mayo, double recipient in 1901 and 1909; Pvt. John Joseph Kelly, Chicago, IL received both the Army & Navy Medal of Honor in WWI; Col. William J. (Wild Bill) Donovan, member of New York’s Fighting 69th in WWI; Audie Murphy, who was turned down by the Marines and the Navy as he was only 5’5 and weighed 112 lbs. The Army accepted him in June 1942, and he became WWII's most decorated hero; Fr. Timothy O’Callahan, who was not only the first Catholic Chaplain to receive the Medal of Honor, but the first of any faith to be so recognized.

For his gallant leadership and fighting spirit, O’Hare Airport in Chicago was named for Lt. Commander Edward H. “Butch” O’Hare, U.S. Navy fighter pilot. Another well-known facility, McGuire Air Force Base in New Jersey is named after Medal of Honor recipient, Thomas B. McGuire, a WWII ace pilot who shot down 38 enemy planes.

There have been millions of Irish and Irish Americans who have served in the US military with distinction. The latest was Col. James Hickey, son of Irish immigrants, a native of Chicago. He commanded the 1st Brigade of the 4th Infantry Division which captured Saddam Hussein in Iraq.

It would be impossible to calculate the exact number of Irish Americans on the Medal of Honor list. However, Irish surnames are plentiful. There are 21 Murphys, 20 Kellys (or Kelleys), and 8 Sullivans. Names beginning with the Irish prefix “Mc” spill onto multiple pages.