EXCLUSIVE: Irish group steps up with offer to save Ireland's Great Hunger Museum

The Save Ireland’s Great Hunger Museum group has made an offer to take over the day-to-day running of the museum, in conjunction with Quinnipiac University. 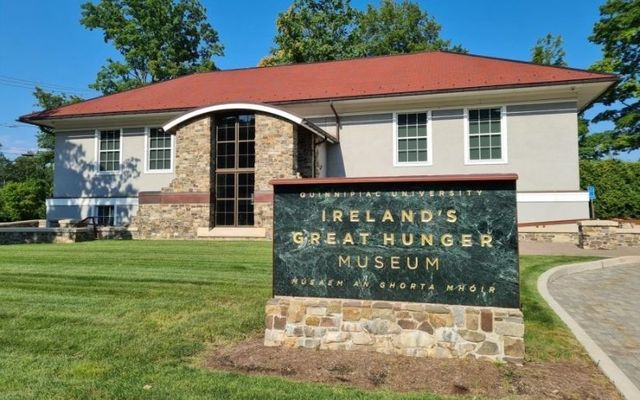 A detailed plan to re-open Ireland’s Great Hunger Museum at Quinnipiac University in Connecticut, shuttered for nearly two years and declared permanently closed last August, has been presented to university administrators by the board of directors of Save Ireland’s Great Hunger Museum. That is the group that has been fighting for several months to keep the museum and its valuable contents exactly where they are.

The targeted opening date, if the proposal is approved by the university in time? St. Patrick’s Day, March 17.

On Tuesday, February 1, four members of the group’s board – executive director Turlough McConnell, professor emerita Catherine B. Shannon, attorney Michael McCabe, and treasurer Sean O’Dowd – held a Zoom meeting for nearly one hour with Quinnipiac University Provost Debra Liebowitz and Vice President Daryl Richard to discuss the board’s proposal to take over the day to day running of the museum, in conjunction with the university.

Save Ireland’s Great Hunger Museum, which has 2,500 members on Facebook, has held events outside the museum, which is located about one mile off Quinnipiac’s campus in Hamden, to raise awareness and advocate for its reopening. The campaign has attracted widespread media attention and prominent political support, including from Connecticut’s two US senators, Richard Blumenthal and Chris Murphy, and Congresswoman Rosa DeLauro. In October, Connecticut State Attorney General William Tong’s office announced an investigation into the closing of the museum and the potential sale of its contents by Quinnipiac, which denied any intention to sell or profit from the artworks.

McConnell told the Irish Voice, sister publication to IrishCentral, that the Zoom meeting was “respectful and productive.”

“We are not sure what the outcome will be, but it was good to talk. Keeping the museum at Quinnipiac, its rightful home, is our goal, and we are prepared to do anything that we can to make this happen.”

McConnell didn’t reveal particulars about what he described as a “very detailed” proposal, but Save Ireland’s Great Hunger Museum would assume management of the facility, which houses the world’s largest collection of art related to the Irish Famine. The group would also be responsible for all fundraising necessary to keep the museum operational.

After Tuesday’s meeting, McConnell sent a follow-up letter to Quinnipiac University President Judy Olian, who took over from Dr. John Lahey, the museum’s founder, after his retirement in 2018. Less than a year later, Olian’s administration announced that the museum was a drain on the university’s finances and would have to fundraise to support itself and stay open. The museum, formally opened in 2012, shuttered due to Covid-19 in March of 2020, and in August of last year, Quinnipiac announced its intention to permanently close it and move the contents to another institution.

McConnell wrote that the meeting facilitated a “productive and frank exchange and allowed us to address fully the issues most pressing to Quinnipiac and to provide a vision for the future of the museum. We are aware that Quinnipiac is talking to other groups but – unequivocally – no other group has the knowledge, expertise, or proven commitment of our group to continue the unique vision inspired by the Great Hunger story that has been fostered over the years at Quinnipiac.

“We made an offer with flexible options to provide a win-win resolution to reopen, finance, and operate the museum over the next five years. In keeping with our campaign to date, we are being transparent in making this offer. We commit to the financial security of the museum for the next five years and beyond, based on feedback from established Irish and Irish American networks.”

The letter continued, “Also, we are a turn-key group with regard to being able to handle the strategic, operational, creative, fundraising, and financial components of running the museum. Our board stands ready to fully consider Quinnipiac’s terms.

“Our goal is to take over the running of the museum in partnership with Quinnipiac, as a way of not only keeping this unique collection in its current location but enhancing the brand that Quinnipiac has been developing for the past decade as the Global Center for Famine Studies.

“We are confident that we could reopen the museum soon as a functioning entity, but our preferred date of opening is March 17, 2022, in commemoration of the 175th anniversary of Black ‘47, the worst year of the Great Hunger.

“Great museums enhance the value of the best universities, and that will extend to the Quinnipiac student body. We anticipate a closer relationship with the university -- students and faculty -- than the museum has had in the past.

The letter concluded, “Allow us to reopen the museum and develop it as a beacon to refugees worldwide, demonstrating hope on the other side of despair. Let's all work together to make this happen.”

When asked for comment about the proposal and the future of the museum, Quinnipiac associate vice president for public relations John Morgan told the Irish Voice via email, “Quinnipiac has been engaged in productive conversations with several different potential partners and is making progress with respect to the IGHM collection and ensuring it remains publicly accessible and continues to promote the important story and learnings of the Great Hunger.”

For more information on Save Ireland’s Great Hunger Museum, or to support the campaign, visit SaveIGHM.org.