Quinnipiac University is working on plans to move Ireland’s Great Hunger Museum collection elsewhere - or, as most see it, to break it up, which would be a real tragedy. 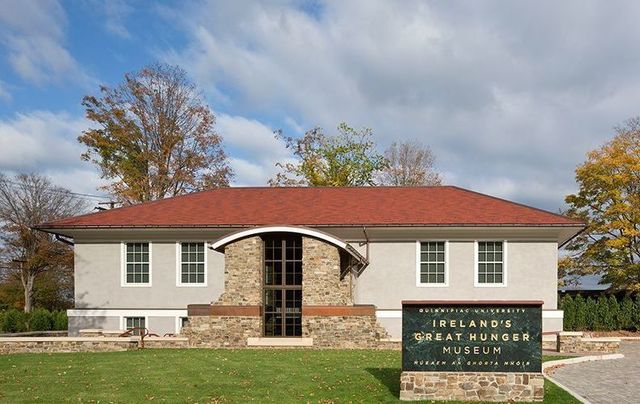 Earlier this month, in a stunning example of cancel culture gone wrong, President Judy Olian of Quinnipiac University in Hamden, Connecticut, announced the permanent closure of Ireland’s Great Hunger Museum, Músaem An Ghorta Mhóir, the gem of Quinnipiac and the only museum in the world to present a comprehensive collection of art and artifacts commemorating Ireland’s Great Hunger, traditionally remembered as the Potato Famine.

Ireland’s Great Hunger Museum was born of a moral vision to continue the visual and artistic remembrance of the Famine, especially as the events of 1847- 1852 have receded from lived experience into geopolitical history.

The dedication of a university space where artifacts, artistic imagery, films, and lectures could be utilized as both monument and teaching institute was a group effort, made possible by former Quinnipiac President John Lahey, generous donors such as alumnus Murray Lender (of Lender’s Bagels), historians, such as renowned Professor Christine Kinealy, artists, and curators, including myself.

The journey that led to founding the museum began with the 2010 exhibition of Quinnipiac's original art collection that I curated at the Irish Consulate’s gallery at 345 Park Avenue. That exhibition, officially opened by Ireland’s President Mary McAleese, drew an overwhelming response that inspired Lahey to create a museum dedicated to the values of social responsibility and justice while educating students and the public about Ireland's Great Hunger.

But that vision could not have been realized without the generosity of Lender. In the summer of 2010, Lender came to the consulate to see the exhibition. For him, it all began with listening to Lahey speak on the history of the Great Hunger.

Lender, a Quinnipiac alumnus and then co-chairman of the university’s Board of Trustees, was inspired to donate funds that led to the creation of Ireland’s Great Hunger Museum in Hamden.

Sadly, he did not live to see the museum open or hear Lahey proclaim at the 2012 opening, "A lot of Irish and Irish American artists and supporters helped to make this day possible, but without the support of a son of a Jewish immigrant from Poland who saw parallels in our experience we wouldn't be able to dedicate this new facility. That's proof of how important this story is to all immigrants."

On September 28, 2012, Ireland’s Tanaiste Leo Varadkar, then minister of transport, tourism, and sport, officiated at the museum’s opening. For eight years, until the pandemic forced an emergency closure in March 2020, the museum brought the story of the Great Hunger to America, with a focus on the victims: the one million who died, the up to two million others who fled by 1855.

The collection also went on tour in Ireland from January through March 2019 (with support from the Irish government). More than 100,000 visitors saw the exhibition during that tour at stops at Dublin Castle; West Cork Arts Centre, Skibbereen; and Cultúrlann Uí Chanáin, Derry.

Sadly, the museum’s closure was not unexpected. After Lahey retired from Quinnipiac, his successor Olian began her tenure in 2019 by canceling the university’s traditional participation in the St. Patrick’s Day parade and issuing immediate threats to stop funding the museum, stating that it would have until June 2020 to become self-sufficient. These actions were taken in the name of cost-cutting.

To the Irish American community, talk of cost-cutting rings hollow. Soon after taking office, Olian announced the university-funded renovation of the president’s home at a cost of $1 million including a swimming pool.

At the time, William Weldon, the Board of Trustees chairman, said in a statement that the home’s purchase and renovation were “a critical strategic acquisition for the university, unanimously supported by the board.”

(It should be noted that Weldon was not renowned for his judgment. Never a supporter of the museum, Weldon, upon his retirement as chairman of Johnson & Johnson in 2012, reportedly received a payout of $143.5 million. In 2011 he earned a place on The New York Times list of “The Worst C.E.O.'s of 2011” for the increased number of Johnson & Johnson product recalls under his leadership.)

Moreover, the museum is, in fact, a bargain. It occupies a building already owned by the university, as is its permanent collection. Its annual operating budget of approximately $300,000 covers a director and staff member and is lower than the budgets for other institutes of the university.

And its greatest value may be its ability to attract students and families. A broad section of students are children of the 35 million Irish Americans in the United States. The museum, with its universal themes of a people’s encounter with bigotry and hatred, provides an international brand and identity for the school especially relevant these days.

According to the local community, the theory is that Olian’s actions are motivated simply by spite against the success of the former administration. In addition to the museum, John Lahey left an enduring imprint on Quinnipiac. During his tenure, the university grew from a small business college in 1987 with 1,902 students to approximately 10,000 today.

By 2018, the university had an endowment of over $500 million, a college of arts and sciences, and eight professional schools: business, communications, education, engineering, health sciences, law, medicine, and nursing. The physical plant also grew from one to three campuses in two towns: the Mount Carmel campus, the York Hill campus, and the newest campus in North Haven that houses most of the graduate programs. The university’s athletic programs also moved from NCAA Division II to Division I athletics. A special point of pride is the Quinnipiac Polling Institute, which grew from a small, local operation in Connecticut to an internationally recognized entity that conducts 12 polls in 11 states, New York City, and nationally. (Recently, Olian’s plan to “monetize” the Quinnipiac Poll was scuttled by the board, as was her other recent effort to charge parking fees to commuter students who protested.)

Other institutes created during Lahey’s tenure include the Albert Schweitzer Institute and three in the School of Medicine alone, in primary care, rehabilitation medicine, and global public health.

Today, under Olian’s leadership, enrollment is down by 20 percent. As reported earlier this year, Quinnipiac, which for years has been demonstrating growth in both size and footprint, is now making 13 budget cuts due to lower undergraduate enrollment this fall.

As a result, the university is working on plans to move Ireland’s Great Hunger Museum collection elsewhere -- or, as most see it, to break it up, which would be a real tragedy for the public and the school.

According to a statement provided by John Morgan, university associate vice president for public relations, “The university is in active conversations with potential partners with the goal of placing the collection on display at an organization that will increase access to national and 14 international audiences about Ireland’s Great Hunger.”

To all onlookers, no partners are as yet on the horizon.

As we approach 2022, the 10th anniversary of the museum's opening, we cannot allow the closure to proceed without a push from the broader community to keep the doors open and this valuable teaching opportunity alive.

Quinnipiac’s students and the Irish American community deserve no less.