Quinnipiac University's Great Hunger Museum is appealing to the public for financial support. 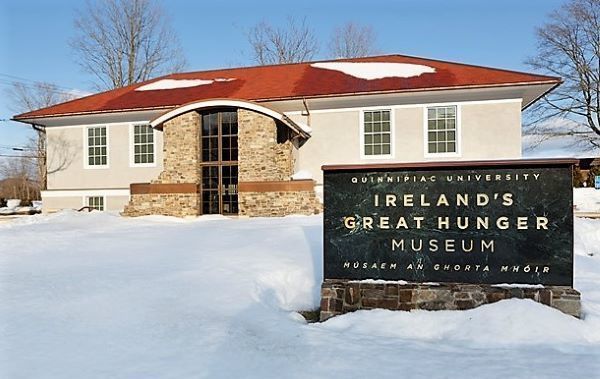 The Great Hunger Museum at Quinnipiac University in Connecticut is appealing for financial support in the wake of news that its funding will cease.

“The University has asked the museum to become a self-sustaining institution and is giving the museum some time to build a donor base.”

“If the museum is to continue, it needs the financial support of the community."

The website for the Irish Great Hunger Museum says: “One of the best ways to support the museum is to become a member. There are many different joining levels, and every contribution directly supports the museum.”

“If you’d like to discuss a philanthropic gift that exceeds these giving levels, please call the museum at 203-582-6500."

You can learn more about supporting the Museum on their website.

In an email, Ryan Mahoney, Executive Director of the Irish Great Hunger Museum, thanked those who have already reached out offering support for the Museum’s mission and goals.

The Irish Great Hunger Museum’s future is now in question after Quinnipiac University’s new President Judy Olian indicated that the university’s resources will be directed elsewhere.

The University said in a statement: “The university is in the midst of a rigorous and comprehensive strategic planning process around the critical priorities of student learning and institutional excellence.”

“Given our many student-centric priorities, our hope is that Ireland’s Great Hunger Museum identifies diverse sources of support for its programs and initiatives, including philanthropy.”

Quinnipiac University has also said it will not sponsoring nor marching in the New York City St. Patrick’s Day Parade in 2019, breaking a longheld tradition.

“As for the parade,” the statement said, “while we enthusiastically support its important goals and underlying spirit, we are redirecting university resources to more immediate needs that serve students on the campus.”

The sponsorship of the NYC St. Patrick’s Day Parade for Quinnipiac University is said to be in the low six-figures, while a position to march in the parade costs $200.

Former president Dr. Lahey told the Irish Voice: “The sponsorship is one thing. That would be the decision of the president. But not marching makes no sense to me.”

Dr. Lahey also said: “The Irish Great Hunger Museum has been an important part of Quinnipiac’s growing international status as an academic institution, and I would hope it remains open on campus.”

“With 20 percent of the student body identifying as Irish and 62 percent as Catholic, it is an important reminder of the historical factors that have created this country.”

“And at a time of growing controversies over immigration, it puts down a marker that Quinnipiac welcomes all at a time when that is not always the case in the halls of power.”

It is reported that Olian and Dr. Lahey will be meeting in the next week to discuss the matter further.