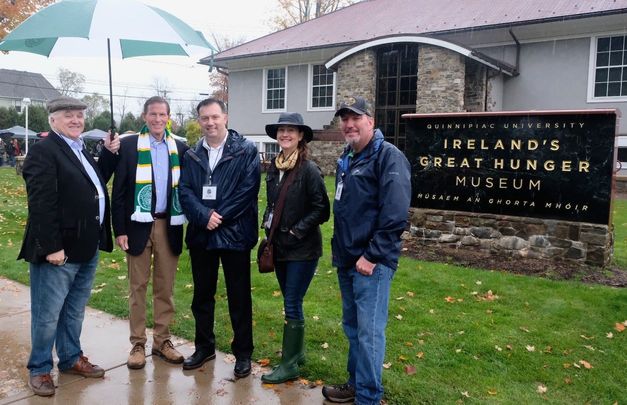 Rain and wind didn’t stop more than 200 people from showing their support for Ireland’s Great Hunger Museum at Quinnipiac University in Hamden, Connecticut, including U.S. Senator Richard Blumenthal, who addressed the crowd and slammed the permanent closure of the museum.

“There are days when I miss being attorney general, and this is one of them because I would be doing exactly what Attorney General (William) Tong is doing and launching this inquiry to enforce the law … if there is wrongdoing in connection with this museum,” Blumenthal said.

“I’m here to say we need to keep this museum, we need to keep this collection intact…here in Connecticut…it should not be dispersed, divided, split up.  That’s what happened to the Irish people as a result of the Great Famine.  This is a moral imperative…put aside the legal inquiry that is ongoing. There is a moral obligation here to the people who worked hard for this museum, who sacrificed to make it possible.”

Blumenthal was referring to the inquiry announced last week by Connecticut’s attorney general, William Tong, into the permanent closure of the museum last August. “We have an open and ongoing inquiry into this matter,” a spokesperson said last week.

Saturday’s salute to the museum took place outside its building in Hamden and was co-presented by the Gaelic American Club of Fairfield.   “We would have had hundreds more there but for the awful weather,” Turlough McConnell, a member of the committee assembled to save the museum who’s known as the agitator-in-chief, told the Irish Voice.

The salute attracted an array of local political leaders who are outraged at the closure of the museum by the university’s president, Judy Olian, and the board of trustees.  The issue is also apparently on the radar of the state’s governor, Ned Lamont, who has been informed about what’s going on by Joe McDonagh, one of the committee leaders and a docent at the museum until its closure.

Organizers of Saturday’s event, buoyed by substantial local and national media coverage including a lead piece in Yahoo! News, are planning the next steps they’ll undertake to ensure that the contents of the museum are kept intact.  These efforts include outreach to the donors and artists who gave to the museum to see what arrangements they made with the university prior to donating.

“We’ve been hearing from other universities about the collection, wanting to know what they can do,” McConnell said, adding that there “isn’t an inkling” that Quinnipiac might reverse course and re-open the museum which was founded by former Quinnipiac President Dr. John Lahey in 2012.

John Morgan, a spokesman for the university, told the Connecticut press last week that Quinnipiac has no intention of profiting from the museum’s contents, and that active discussions with other institutions about the collection are ongoing.

“It’s important to note that the closing of the museum’s space in Hamden is not the closing of the incredible collection or of the story of the Great Hunger,” Morgan said. “We are committed to finding a solution for display of the collection that will ensure it remains publicly accessible, advances the museum’s original mission, and preserves the story of the Great Hunger.”

The university, he added, is also cooperating with the attorney general’s probe.  “(We are) responsive to the attorney general’s office and will provide the necessary information requested about Ireland’s Great Hunger Museum, including relevant policies about gifts, any donations that were received, and the financial operations of the museum.”

McConnell said the committee members “are only getting started.  This is a story of survival.

“There’s a big mountain in Hamden called the Sleeping Giant. And that’s the museum is, only now it is wide awake and so are we.”