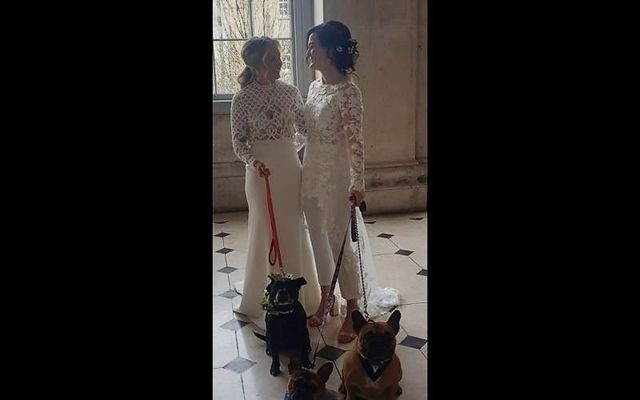 Fr Byrne, parish priest of Abbeyleix in Co Laois, congratulated Harrington on her wedding to Mandy Loughlin and tweeted, “I find it sad that as church we can bless cars, tractors…I’m not assuming this couple may want such ritual, but for many likewise who do we should.”

He described Harrington as “a national treasure” and said he wished her and her partner health and happiness.

Kelly Harrington is a national treasure. I wish her future with her partner health and happiness. I find it sad that as church we can bless cars, tractors… ……… I’m not assuming this couple may want such ritual, but for many likewise who do we should….. #akunametta pic.twitter.com/uUqGS5wqmD

Byrne later told the Irish Independent that Harrington, a healthcare worker as well as a boxer, “encompasses and personifies all that Christianity is about.”

He said the church’s ban on same-sex blessings is “one of the reasons why the level of practice among under-60s at the moment is in freefall.”

Referring to the sense of exclusion many gay couples feel within Catholicism, he asked, “How can we continue to alienate these couples at such a happy moment in their lives and not offer at least some form of recognition – spiritual nourishment – and ritual?”

He said he did not know Harrington personally or anything about her religious background or tradition. “I wanted to acknowledge a happy moment in her life particularly in the context of Holy Week, which is a narrative about inclusion, love and welcome,” he said.

Byrne, who was congratulated by Labour TD Aodhan O Riordain for his comments, said he was speaking on behalf of the vast majority of the members of the parishes that he served and particularly the younger members of those parishes.

He added that he also spoke on behalf of the majority of clergy who find it not just disappointing but almost embarrassing that they cannot celebrate these occasions in the churches.

A year ago, Byrne told Pat Kenny on Newstalk radio: “There's far too many of us priests who remain silent, who get on with our business on the ground. It's almost like there's two churches out there. There's the local one that tries to just be part and present in the life of everybody, and then there's this official one that's far away, and that often enforces its teachings from on high and it doesn't wash with people.”