Internet giant Google defends their sale of IRA t-shirts as the organization is not listed as a banned terror group in the US. 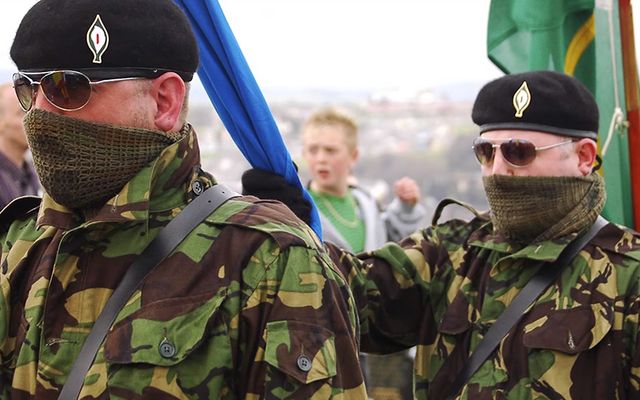 IRA t-shirts are still being sold by Google, despite families of IRA victims protesting that Irish Republican Army merchandise glorifies the UK-banned organization.

Family members of those murdered by the Irish Republican Army during 'the Troubles' in Northern Ireland have voiced their disgust that Internet giant Google continues to sell IRA t-shirts.

The IRA victims are said to be in disbelief that Google refuses to stop the sale of IRA merchandise that they believe glorifies the Irish republican paramilitary organization that killed an estimated 1,800 people over 30 years of violence.

While the IRA is a banned terror group in the UK, it does not appear on the US list of foreign terrorist organizations and, therefore, is not recognized by as such by Google.

Google's decision to recognize as terrorist organizations only those on the the US list and not those cited as terror groups in the UK has been deemed as “sickening” by one campaigner for victims of the Troubles.

"Google's attitude on this matter is absolutely sickening," Kenny Donaldson of Innocent Victims United told the Mail on Sunday.

"The IRA is a proscribed terrorist organization in the UK and this is a matter on which the UK Government needs to exert its pressure.

"Google needs hit financially through its very favorable taxation deal if it insists on being a facilitator for the promotion of terrorism idolatry."

Read more: Is this the most offensive Irish t-shirt ever created?

The IRA t-shirts, being sold online for an average of $30, include one with a picture of the Irish flag overlaid with a gun and the words “Irish Republican Army.” Another shows a group of masked men running through the street.

Colin Parry, whose 12-year-old son was killed when the IRA bombed Warrington in England in 1993, told The Mail on Sunday: “As long as there’s a commercial advantage for them, a pound to be made, they will pretty well do anything to sell things.

"It is tasteless and it is offensive to victims of the IRA. Probably because they’re essentially an American company, they don’t have much in the way of sympathy for victims who’ve suffered at the hands of the IRA.

“Whoever makes these decisions at Google is either unaware of or doesn’t care about the fact that the IRA was responsible for killing thousands of people.”

Also writing in the Mail on Sunday, former Conservative minister Norman Tebbit demanded that the sale of the IRA t-shirts must stop.

"Effectively, the company is saying that just because the IRA does not appear on the official US list, it is not a terrorist group," he said.

"Maybe Google needs some help. The company could try talking to the widow of Ian Gow MP, who was murdered in July 1990 outside his home.

"Perhaps Google should also try talking to the relatives of the five people killed when Brighton's Grand Hotel was blown up during the 1984 Tory Party conference.

Search engine Google provides an online shopping website where retailers can advertise their products in return for an undisclosed percentage of the profit. While Google does not produce the IRA t-shirts themselves, they allow others to feature them on this site.

"While we want Google Shopping to help connect people with advertisers and products, there are certain products that we don't allow,”  a statement from Google said.

"We have strict advertising policies in place and when we find violations we work quickly to remove them."

Read more: This might be the most offensive St. Patrick’s Day t-shirt yet

While it is reported that the search engine previously featured clothing branded with the insignia of other terror groups which were later removed, it is not yet known if they will reassess their decision on IRA t-shirts in light of the recent complaints.

The online store run by eBay was also alerted to the sale of similar IRA-branded clothing recently, with the company issuing a promise that it would be removed.

The t-shirts have been the cause of some intense debate. When the issue was discussed on London-based national talk and phone-in radio station LBC, the debate resulted in a furious reaction from presenter Darren Adam when a caller claimed the IRA had never engaged in an act of terrorism.

An Irishman named Jim called in to the show to express his belief that the British state actors were the only terrorists and that it was their "appalling anti-Irish racism which demonized them [the IRA] and called them terrorists."

"Look at the bombing the RAF did in the Iraq war. I know the IRA was responsible for killing about 1,700 people in the last conflict. I don't believe in killing or in violence. I am not defending [violence] I am pointing out it is anti-Irish and racist [to call them terrorists],” he continued, stating that the IRA was a "democratically elected organization."

"What the hell is wrong with you," presenter Adam argued.

"You are saying the IRA has never been involved in terrorism. That is the single most ludicrous thing I have heard on this program.

This call ends with @DarrenAdam asking: "When you wake up in the morning this stupid, how do you get through the day without falling over?" pic.twitter.com/pI9INv4XOe

"When you wake up in the morning this stupid, how do you get through the day without falling over?" the English presenter added as he ended his tirade.

One of the first options available as a source for these t-shirts on Google is a site named RedBubble.com, which also stocks t-shirts branded with images which could be regarded as pro-Unionist.

While one of the first options listed is a shirt promoting the Irish National Liberation Army (an Irish republican socialist paramilitary group) stating that “Resistance is not Terrorism,” the site also carries a map of Ireland minus the six counties of Northern Ireland which some Republicans could find offensive.

Zazzle.com stocks shirts with phrases such as “Up the Ra” and “Sniper at work” alongside an image of a rifle.

The Sinn Féin store in Dublin also stocks a t-shirt they name the “Historical IRA t-shirt” featuring images of members holding guns alongside a quote from Hunger Striker Bobby Sands.

IrishRepublicanArmytShirts.com even features a shirt stating, “Stay calm and let the IRA handle it.”

Should Google continue to allow the sale of t-shirts featuring IRA branding? Let us know your thoughts in the comments section below.