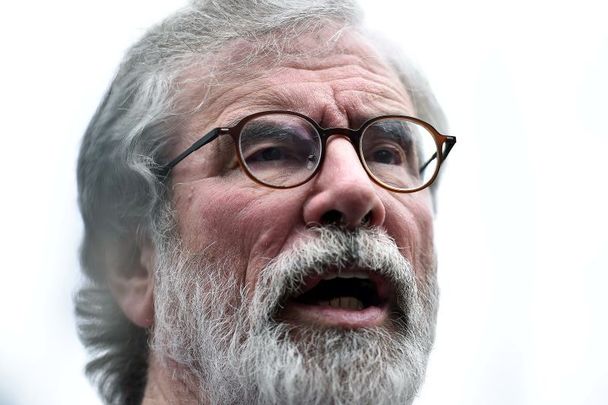 August 10, 2019: Former Sinn Féin President Gerry Adams holds a press conference as he visits a community centre in the New Lodge area in Belfast, Northern Ireland. Adams was visiting the area in solidarity with the local community after unrest at a New Lodge bonfire in which a man was stabbed and three police officers were injured Getty Images

“Tiocfaidh ár lá,” meaning “our day will come,” is a slogan associated with Irish republicanism and is widely credited to Bobby Sands.

Adams put a spin on the slogan in a Christmas advert for Ferry Clever, a graphic design company based in Derry in Northern Ireland. The video was meant to raise funds for Foyle Search and Rescue services.

In the video that has since been taken down, a young man answers his doorbell thinking he might be receiving Christmas carol singers, only to find Gerry Adams on his doorstep.

“Few seconds, I’ll get you some money,” the man, wearing a Ferry Clever top, tells Adams, who waits with his hand opened.

“Have a Gerry merry Christmas,” Adams tells the man when he offers him a tip.

Back in the house, the man’s partner asks if it was carol singers at the door.

“I can neither confirm nor deny it was carol-singers,” the man tells the woman.

The man then turns to the camera and says, “They haven’t gone away, you know," a phrase Adams used in 1995 when referring to the Provisional IRA.

On December 10, Ann Travers, whose sister Mary was murdered by the IRA in 1984, shared the video on Twitter and called Adams "depraved."

"Anyone who thinks this is funny lacks emotional intelligence," she added.

This man is depraved. He was in Donegal when my sister's murder was carried out in April 1984. She never got to celebrate any further Christmases and it was never the same for us. Just like thousands of other families Anybody who thinks this is funny lacks emotional intelligence pic.twitter.com/ENloTsO9xP

In a Facebook post on December 12, Ferry Clever said it has removed its Christmas advert: “Whilst our business is based around satirical comedy, it was never our intention to offend anyone.

“We have now removed the video and have stopped selling the card in question. This will not affect the charitable end of this initiative as we will be making a donation to ensure the charity is not negatively impacted.

“As all of our customers will already know, we regularly create videos with well-known and high-profile people for charitable causes specifically to raise awareness and much-needed funds for local charities. These initiatives are a very effective way for us to give something back to the local communities we are ultimately here to serve however we accept in this instance our approach has unintentionally caused hurt which we deeply regret.”

* UPDATE * Whilst our business is based around satirical comedy, it was never our intention to offend anyone. We have...

Gerry Adams still features on some other Ferry Clever products, including a Christmas card that says “All I want for Christmas are the 6 counties” with a cartoon of Adams, dressed as Santa Claus, saying, “I can finally confirm and not deny … I’m Santa.”

Travers welcomed the apology from Ferry Clever, but pointed to the company's other products that "aren't very funny either for obvious reasons."

I have just seen the apology from #FerryClever along with their statement regarding the removal of the video. I'm thankful that they acknowledged the hurt caused and accept that that wasn't their intention , however these cards aren't very funny either for obvious reasons. https://t.co/eHvp3ePTCy

In an interview that aired on Tuesday, Sinn Féin TD Eoin Ó Broin told WLR FM: “I don’t believe for a second Gerry either intended to cause hurt or offense to anybody; I really don’t.

He added: “Yes, I think if any of us say anything, even if it unintentionally causes hurt, we should apologize for it. But let’s also then move on as politicians and deal with the very heavy lifting of dealing with the consequences of 30 years of armed conflict, significant loss of life and trauma, because there’s lots of hard work that still needs to be done, and Gerry and others are doing that work, day in and day out.”

“Different people will have different views in terms of whether it’s actually funny or not, but it was done for a good cause. It was done to raise money for Derry search and rescue operations, and that’s the context it will have to be taken in.”

When asked if Adams should apologize for using “tiocfaidh ár lá,” Carthy said the phrase is “political” and that he does not consider using it as a basis for having to apologize.

“I don’t think that Gerry Adams has anything to apologize for,” Carthy said, adding that Adams has played a “pivotal role” in Irish reconciliation.