Nigel Farage utters the IRA slogan "Tiocfaidh ár lá" (our day will come) in what appears to be another "hoax" request via Cameo. 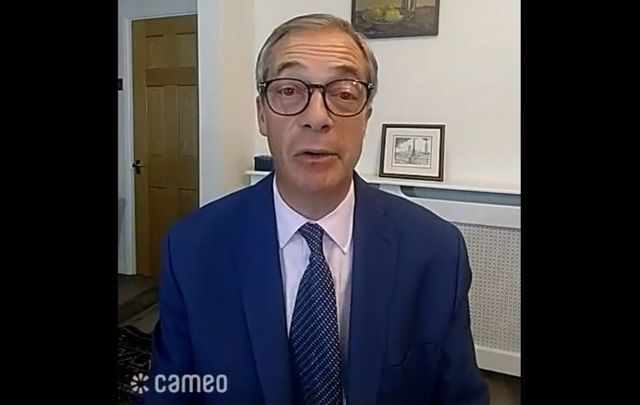 Nigel Farage in another Cameo video.

Nigel Farage has been duped into uttering an IRA slogan in an online video for the second time in as many weeks.

Farage, who was left red-faced recently after he was paid to say "Up the 'Ra," recorded a separate Cameo video addressed to a person named Gerard, which is the full name of former Sinn Féin President Gerry Adams.

In the newly-surfaced video, Farage references the republican slogan "Tiocfaidh ár lá" (our day will come) and mentions Brighton, where an IRA bombing targeting then-Prime Minister Margaret Thatcher and her Conservative Party killed five people in 1984.

"Con and Mag got onto me because they wanted to wish you a happy 71st birthday!

"And they're looking forward to seeing you and some of the old team back at Tiocfaidh ár lá’s in Brighton.

"I’ve had the full story. You were the team leader there for many years.

"They now want to wish you a belated – because we kind of missed it by a couple of days – but a belated 71st birthday and they hope you’re having a very happy retirement. As do I Gerard, enjoy."

Farage recorded the video through Cameo, where celebrities record personalized messages for a fee. His Cameo profile says: “They call me Mr Brexit... some people say I am controversial, and I couldn’t care less.” He charges €86 for personalized videos and €1,290 for business shoutouts.

So nice of Nigel Farage to wish Gerry Adams and all the team a belated happy birthday and retirement and tiocfaidh ar la from Con and Maggie in Brighton so soon after saying Up The Ra to everyone pic.twitter.com/tb6a4EYJrm

Last week, another Cameo video of the Brexiteer saying "Up the 'Ra," a slogan used in support of the Irish Republican Army (IRA), began to circulate online.

“This message is for Brian Kelleher, Brexiteer, and I hope you have a great birthday. This comes from your good friend, Aidan.

"Now, it’s a bit early in the day, so all I’ve got actually is coffee, but I hope you enjoy a few pints with the lads tonight.

Afterward, Farage told The Belfast Telegraph: “It did not occur to me that this particular request was a hoax and any suggestion to the contrary is absurd.”

Farage has since appeared on the Irish current affairs program Claire Byrne Live where he was challenged by Byrne over the faux pas.

"I know that you apologized for the birthday greeting that you delivered in the last couple of days, but I want people to see just how much you know about the history and culture on this island," Byrne told Farage.