British politician Nigel Farage claims he did not know the implication of "Up the 'Ra!," a slogan used in support of the IRA, when he recorded the Cameo video. 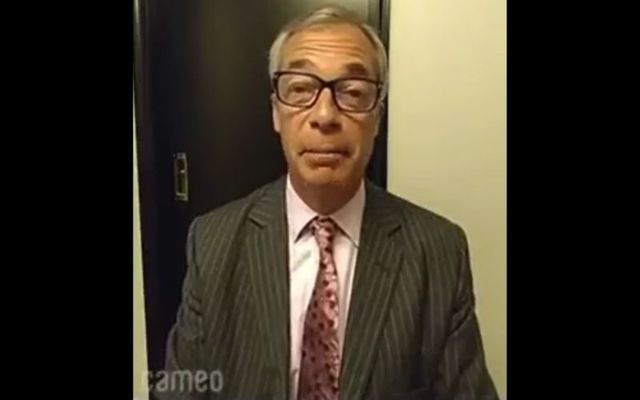 Nigel Farage has responded after saying "Up the 'Ra!" in a recent Cameo video. @AntrimLens, Twitter

Nigel Farage, a British politician who was at the forefront of the Brexit campaign, was paid $100 to say “Up the ‘Ra!” in a recent Cameo video.

In the brief video, Farage says: “This message is for Brian Kelleher, Brexiteer, and I hope you have a great birthday. This comes from your good friend, Aidan. Now, it’s a bit early in the day, so all I’ve got actually is coffee, but I hope you enjoy a few pints with the lads tonight.

“Up the ‘Ra” is a slogan used in support of the Irish Republican Army (IRA).

Kelleher apparently shared the video on his Facebook profile, and a screen recording of it has since begun to circulate online:

He's not getting an invite to .@JimAllister Christmas party. pic.twitter.com/6C1MHG98fd

Cameo, based in Chicago, is an app where users can pay their favorite celebrities - including, evidently, politicians - to record a personalized video message.

On his Cameo profile, Farage’s bio reads: “They call me Mr Brexit... some people say I am controversial, and I couldn’t care less.” He charges $100 for a personal message and $1,500 for a marketing campaign or business event.

Farage has since told The Daily Mail: “If I saw 'up the RA' I would have looked at that as something very innocent, and wouldn't have even known there was an implication to it.

Asked if he would accept a message request that was supportive of the IRA, Farage replied: “Are you joking? I had a face-to-face death threat from them.”

Farage also told the Belfast Telegraph: "I do a large number of Cameo messages and always reject those that are unsuitable, but the odd one can slip through the net.

“It did not occur to me that this particular request was a hoax and any suggestion to the contrary is absurd.”