A former CNN photojournalist is hoping to find the child he made an honorary reporter during President Regan's 1984 visit to Ireland. 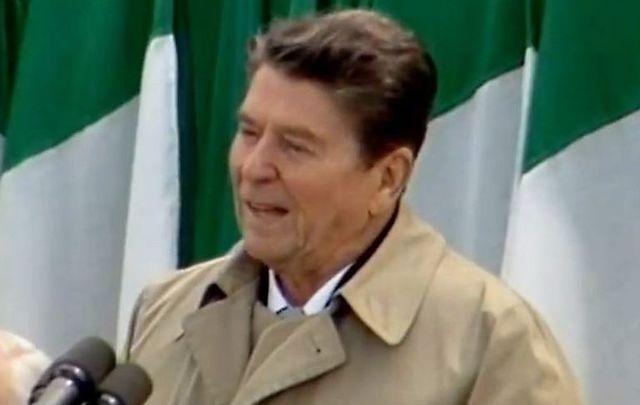 Photojournalist Reggie Selma is searching for an Irish man named Martin who he made an “honorary reporter” while covering President Reagan’s 1984 visit to Ireland.

On Friday, Selma, a former senior photojournalist with CNN, spoke at Inspire Fest in Dublin when he recounted meeting then 9-year-old Martin during President Reagan’s 1984 Irish visit.

Reggie Selma told the story of meeting Martin, a young man, on College Green in 1984 during President Reagan's visit. He'd like to meet him again. Can you help us #findMartin? #inspirefest pic.twitter.com/pwVotqNe7U

Selma said he was setting up nearby to Trinity College in Dublin in preparation for a live broadcast from the then-US President when he met Martin.

“I always loved to get kids out of the crowd, make them an honorary CNN reporter,” Selma said.

“I saw this young boy with this beautiful hat and smile and I called him over and put him to work.”

“As he was about to leave, it dawned on me all this time I never asked him his name, so I said, ‘Young man, what’s your name?’ and he said, ‘Martin.’”

Selma added: “This young lad Martin inspired me many years ago when I was here with President Reagan. So Martin, if you’re out there, you inspired me 35 years ago, and I want to inspire you again today.”

Selma separately told Ryan Tubridy on RTÉ Radio 1: "Coming from the south and being a child of the civil rights movement and having this young Irish lad telling me that that was his hero.

"I have this dream while I'm here, I'd love to find Martin and tell him that he is my hero as well."

Following Selma’s speech at Inspire Fest on Friday, the hashtag #FindMartin is taking off on Twitter:

You may have heard him with Ryan Tubridy @RyanTubridyShow on @RTERadio1 this morning, or maybe on stage at #inspirefest where he got a standing ovation today. Reggie Selma wants to find a young man he met in Dublin in 1984 during President Reagan's visit. Can you help #FindMartin https://t.co/8niaJnOOIo

Reggie Selma, former senior photojournalist, CNN is looking for an Irish man called Martin who he met when Martin was a 9 year old boy. He let Martin have a go as a presenter when CNN were filming here 30 odd years ago. We need to #FindMartin for Reggie! #Inspirefest

Can we hep #ReggieSelma #FindMartin Reggie was the @CNN cameraman covering Ronald Reagan visit to Ireland in 1984 & Martin was a 9yr old named after #MartinLutherKing that he connected with & would like to reconnect #Inspirefest Pls RT pic.twitter.com/NERu0ELMUb

Reggie Selma wants to #FindMartin, a 9yo boy he made an honorary journalist in Dublin City centre in the 60's when he was here with CNN. Can we help him? @JOEdotie @Herdotie @RyanTubridyShow https://t.co/13lGLCxRup

Are you Martin, or do you know who he could be? Let us know in the comments!