Rachel Mulcahy, who says she is "head over heels" in love with Jesus, has been banned from Clonard Monastery in Belfast after she was "writhing about on the altar." 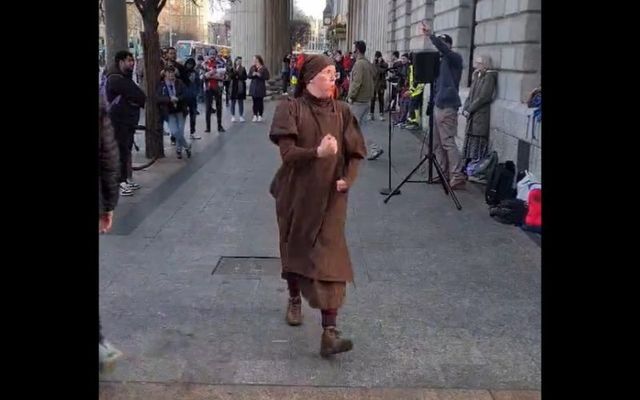 Rachel Mulcahy, a “fake nun” who has been spotted dancing in the streets of Dublin and Belfast in recent weeks, has been served an injunction to stay at least 150 yards away from Clonard Monastery in West Belfast after priests reportedly complained about her behavior.

Mulcahy was served with an interim injunction and an application for a full injunction is set to be heard at Laganside court later this month, Sunday Life reports.

“Yes, a court has banned me from going near Clonard,” Mulcahy told Sunday Life.

“I am praying for the souls of the parishioners and the priests. I’m praying for you too. I’m going to need some time to consider this before deciding to speak further.”

Later, in a letter to Sunday Life, Mulcahy said: ”I’m in love. Head over heels. I can’t stop it. I love Jesus Christ so much that all I can think about is him. There is no one else I can think about only him. I adore him. I never ever want to be away from him.”

Mulcahy has appeared on social media in recent weeks as curious onlookers recorded her dancing in both Dublin and Belfast. She is usually accompanied by two evangelical preachers playing musical instruments, Sunday Life reports, though there is no suggestion of wrongdoing on their part.

O'Connell street just now. I have no idea... pic.twitter.com/a5iFZGM23a

Another video also shared on Twitter showed Mulcahy in Belfast with a microphone and waving her arms in the air:

Belfast city centre, her name is Rebecca she is NOT a nun + is more compos mentis than she lets on! Rebecca is known by the PSNI and is banned from entering clonard monastery and god knows where else for frightening ppl and posing a risk with her very bizarre behaviour. pic.twitter.com/AL2LYO7pe2

Mulcahy reportedly put on a similar display at Clonard Monastery which led to the injunction.

“She was showing up at services in Clonard dressed in a brown habit, even though she is not a nun,” an insider told Sunday Life, who said Mulcahy was "writhing about on the altar."

At first, Clonard staff ignored Mulcahy, but they were eventually forced to respond.

“The congregation would be quite elderly and they felt intimidated by Ms. Mulcahy’s behavior," the source said. "They just want to be left alone to pray in peace.”

A representative from Clonard Monastery told IrishCentral on Tuesday that they could not comment as it is now a legal matter.