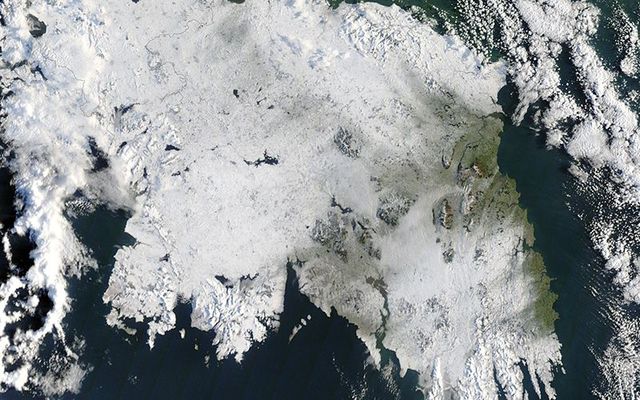 As Francis Ludlow, leading historical climatologist at Yale University, explained in a documentary for Irish state television RTÉ, a waist deep snowfall in 822 sparked starvation across the land. The documentary, presented by Cork native John Creedon, told how Ireland experienced extreme winters as far back as the 800s. Ludlow presented his findings based on the medieval history manuscript, the Annals of Ulster written from the early 400s to 1504.

As he told the Irish Examiner at the time, “It recorded weather extremes. In the year 818, it says ‘sneachta mór’, a great snow.

“In translation, it reads that in 818 there was abnormal ice and much snow. It described how the River Boyne was frozen and lakes were frozen and you could walk across them on foot.

“It is identifying for us a major cold spell in the winter of 818.

“The prolonged cold spell had a devastating effect on the Irish population.

“By 825, we have the text reporting conditions of widespread famine and scarcity and various diseases affecting, it says, particularly the old and the young.

“This is effectively the outcome of the hardship of the previous years. These people would have been much more exposed to the severe weather and they let you know in no uncertain terms.

“They often describe not just the cattle dying but wild birds and wild deer. Most of their stored grain would have gone towards sowing the next year’s crop.

“If they were forced to eat very much of that in the first year, then they were faced with having less grain to sow for the next year. It can often just delay the inevitable and delay the onset of scarcity.”

Ludlow also explained how the weather extremes would have had a very different effect in the 820s compared with the 21st century.

Presenter Creedon said: “Our weather has always been changeable. It’s funny. We have a wet summer and we think of spoiled holidays but in the 800s if they had a wet summer, they would have famine and starvation the following year. We take the weather for granted.”

Gerard Fleming, a meteorologist with RTÉ, explained in the documentary how Ireland would be as cold as Siberia without the Gulf Stream which comes across from Florida.

He said: “We’re pretty far north, 52, 53, 54 degrees north, and we’ve no right to get the temperatures we get at that latitude, except for the fact that we have this big warm ocean to the west and south of us.

“With the Gulf Stream in particular the water temperatures around us are the key to our temperature and our rainfall. If you look at a place like Irkutsk in Siberia which is just about the same latitude as Dublin, they would be getting down to minus 30 to minus 35 degrees Celsius in the middle of winter.”