How Marie Owens, America's first female cop, helped the people of Chicago and her first-hand experiences of racism in the US against Great Hunger immigrants. 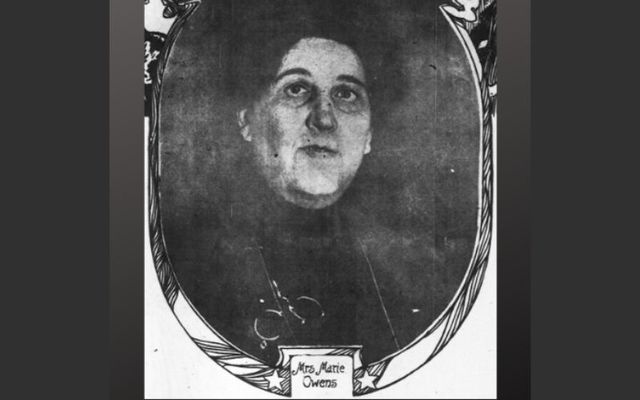 America’s first female cop, the daughter of Irish Famine immigrants - how she helped the people of Chicago and her first-hand experiences of racism in the US against Great Hunger immigrants.

A retired Chicago police officer and amateur historian uncovered the records of Marie Owens, the daughter of Irish Famine immigrants, believed to be the first female cop in American.

An incredible, hard, and rewarding life this Irish American woman’s life also sheds light on the racism and hardship inflicted on the Irish in the post-Great Hunger years.

Rick Barrett made the discovery of these records while researching Chicago law enforcement. Owens, née Connolly, joined the Chicago police force in 1891. Born in Ottawa in 1853, Owens was the daughter of John Connolly and Mary Hayes, who had both fled Ireland for Canada during the Famine. She grew up in Ottawa’s Irish slums.

Later, with her husband Thomas, she moved to the United States. In 1888, Thomas died of typhoid fever and Owens, left with five children, needed to find work.

She was hired by Chicago’s health department to inspect factories and sweatshops, as the treatment of children in the city was causing outrage. However, her efforts were stymied as inspectors were not granted the power to enter these buildings.

“Sanitary inspector Marie Owens dove into her work with a passion, removing illegally employed children from their workplaces, helping them find other means of support and even paying out of her own pocket to help their destitute families. She soon earned a reputation for zeal and effectiveness tempered by a diplomatic approach to parents, children, and business owners that made her as popular as someone in her role could be,” the site Mental Floss notes.

As the public outrage grew, Owens' was transferred to the police department and given the power to arrest. She was given the title of Detective Sergeant and a star in 1891, at the age of 38.

Barrett, the amateur historian who unearthed Owens'  story told the Sunday Times. “There was a great deal of prejudice in the US against foreign blood, against Catholics and especially against the Irish.

“She had it all stacked against her.”

As Barrett researched he found references to Owens as the “only woman police sergeant in the world” in the Chicago Tribune in 1904 and 1906. He also discovered an editorial Owens had written for the Chicago Tribune, in 1901, among other records.

“It’s her own words in her own hand — a golden nugget for a researcher to find.”

“When the work was first begun a woman wearing a police sergeant’s star was a novelty.

“Manufacturers in some cases were not inclined to admit me to their workshops, but armed with the strong arm of the law and the will to do good, I soon found that in most cases the merchants met me halfway and rendered me great assistance.”

In 1906 Owens told the Chicago Tribune "I like to do police work.

"It gives me a chance to help women and children who need help. Of course, I know little about the kind of work the men do. I never go out looking for robbers or highwaymen. That is left for the men. ... My work is just a woman's work. In my sixteen years of experience, I have come across more suffering than ever is seen by any man detective. Why it has kept me poor giving in little amounts to those in want. I have yet the time to come across a hungry family that they were not given food."

In an op-ed she wrote for the July 28, 1901, issue of the Chicago Daily Tribune, Owens described her early days on the job:

“The sights to be seen in the slums today can in no way compare with those of ten years ago and the suffering due to the inability of the older members of the family to work is, indeed, pitiable. Children were found working in factories all over the city, the frail little things in many cases being under 7. The pittance of 75 cents or $1 a week, however, helped to buy food for a sick mother, though it was at the cost of health and education.

“When the work was first begun a woman wearing a police sergeant's star was a novelty. Manufacturers in some cases were not inclined to admit me to their workshops, but armed with the strong arm of the law and the will to do good I soon found that in most cases the merchants met me halfway and rendered me great assistance.

As a result, the children were gradually thinned out, and the employers became accustomed to asking for affidavits required by law before work was given to children. Mothers had to depose as to the children's ages, and with these papers, the latter were enabled to get employment in the larger factories and stores."

In 1923, after a 32-year career in the Chicago police force and having helped thousands of women and children, Owens retired. She died in New York, aged 74.

Her superior officer, Captain O'Brien, told the Chicago Tribune, before her retirement. "Give me men like she is a woman and we will have the model detective bureau of the whole world."