This is the oldest known photo of an Irish Famine survivor

The oldest known photo of an Irish Famine survivor was believed to have been taken in 1853, shortly after the end of the Famine. 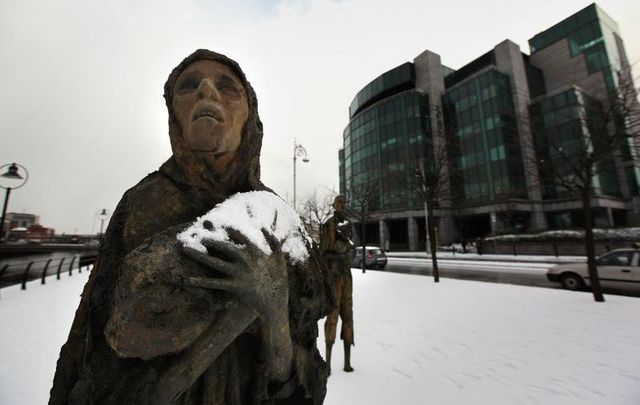 Not much is known about the subject of the historic photograph.

The oldest known photo of an Irish Famine survivor was taken by photographer John Gregory Grace in 1853.

The man, a laborer, featured in the historic photo is one of the first Famine survivors to ever be photographed, as photography was still extremely new at the time.

The man is believed to have been working on the estate of the Duke of Devonshire in County Waterford, though nothing more is known about the subject of the portrait other than his good fortune in surviving hunger and disease throughout the years 1845 to 1852, and at not having had to emigrate to survive.

The historic photo was displayed as part of The Irish Potato Famine exhibit hosted at Dublin's Stephen's Green Shopping Center.

The exhibition was curated by historian Gerard McCarthy, who felt it was important that something is produced for the public during the 170th anniversary of the worst year of the Famine, Black ‘47.

"This is a very important year as it is 170 years since 1847, which is considered to have been the worst year of the Famine in Ireland,” McCarthy told the Irish Independent.

"I'm not sure if there are any events happening to commemorate it around the country so I decided to put together this exhibition."

"I've been researching this for about six months so I have a lot of information people might not have seen before, particularly from private collections."

"The man who owns this photo reckons it is the oldest photo that exists of the Irish famine. It's extremely rare as photography would have still been quite new."

“This photo will be the main logo for the exhibition as it's quite eye-catching,” McCarthy continued.

"My idea is I want this to be accessible for people. I know some historical exhibitions can be a little bit boring, but this is done in such a  way that it sticks to the story, it uses the facts but it tells the story in an easy way with very large display panels, a short film and it's heavy on photos."

"Even if you don't know anything about the Famine hopefully you'll still find it very interesting."