A former British police chief has pledged to do all in his power to uncover the truth behind the 46-year-old Dublin and Monaghan bombings. 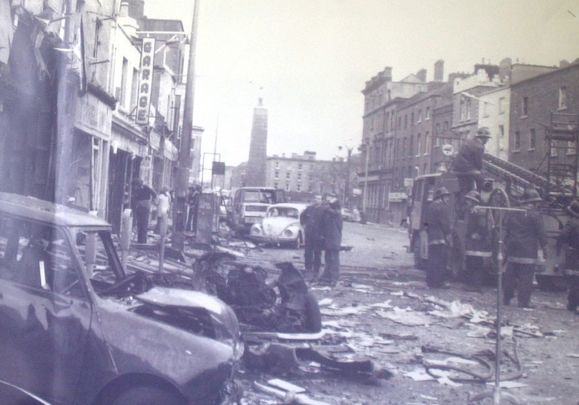 Wreckage from the 1974 bombing in Dublin. RollingNews

Jon Boutcher, ex-head of Bedfordshire Police, is already investigating the British army agent known as Stakeknife and the Glennane Gang, a group of loyalists who targeted Catholics in what was known as the “murder triangle” areas of counties Armagh and Tyrone.

He said on Sunday, the May 17 anniversary of the Ulster Volunteer Force (UVF) bombings in Dublin and Monaghan that claimed a total of 34 lives, that his team is also inquiring into those attacks.

Boutcher’s team is called Operation Kenova and it was set up in 2016 when he was still chief constable of Bedfordshire. His 60-strong team has been probing the scandal of which British security agency controlled double-spy Stakeknife, widely identified as a leading former IRA Belfast man called Freddie Scappaticci who denies he is Stakeknife but who left Northern Ireland in 2003 for a secret location.

The Dublin-Monaghan bomb families were unable for the first time to hold their annual commemorations due to the COVID-19 lockdown.

Instead, Father Tom Clowe celebrated a special Mass in St. Agnes’s Church in Crumlin in Dublin on Saturday afternoon that the families and others were able to view remotely.

Its members comprised the UVF and also some personnel from the former Royal Ulster Constabulary (RUC) and British Army, leading to allegations there was British state collusion in the Dublin-Monaghan attacks.

As the bombings happened in the Republic, in strict jurisdictional terms those killings don’t come under Boutcher’s remit.

But Boutcher told The Irish Times he is investigating the killings on the basis many of the files relating to the bombings are in Northern Ireland and therefore come under his purview.

He said he is in regular contact with Garda Commissioner Drew Harris and is liaising with the Dublin-Monaghan families.

Boutcher said, “It is only right that I will look with great focus at any of those people from that gang that may have been involved in the Dublin-Monaghan bombings, and also other offenses committed in Dundalk and south of the border.”

He added, “This series of coordinated blasts killed 34 people going about their normal everyday lives, including a full-term unborn child, an entire family, and tore countless other families apart.

“The events were cowardly and evil beyond comprehension, targeting innocent people as they went about their lawful business that Friday afternoon.

“To listen to the heartbreaking stories of each of these remarkable families would make everyone realize that they deserve answers as to what happened; who was responsible, who knew what, and all agencies and stakeholders with information disclosing what they hold.”