MP Colum Eastwood says his calls for action are falling on "deaf ears" as an Afghan man in Derry is desperately trying to help his family stuck in Kabul. 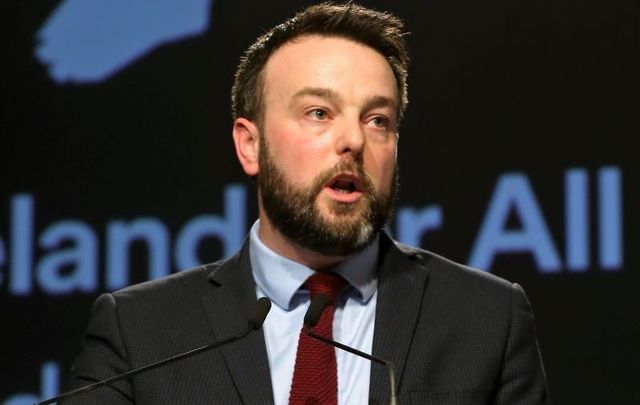 MP Colum Eastwood of SDLP says the British Foreign Office was "not prepared" for the situation in Afghanistan. RollingNews.ie

MP Colum Eastwood is urging the British government to take action after one of his constituents in Derry, Afghan man Muhammad Edrees Kharotai, reached out for help for his mother and sisters who are trapped in Kabul.

"I was speaking to my mother and she said that my younger sister has been taken," Kharotai told BBC Radio Foyle on Thursday.

"I don't know who has taken her, if it is the Taliban or if it was the ISIS-K - I just don't know yet,” Kharotai said.

Since the Taliban’s dramatic takeover in recent weeks, Kharotai’s mother and sisters had to flee their home and are now believed to be living in a tent in a refugee site in Kabul.

Kharotai, who fled Afghanistan in 2011 after his father, a government official, was killed by the Taliban, is desperate to save his family.

“We were a target in the past,” Kharotai said. “I still remember the fear people had [of the Taliban] and they’re still the same people as they were 20 years ago.”

He told the Irish Times that his mother and sisters tried to get a flight out of Afghanistan, but facing massive crowds and sounds of gunshots, they weren't able to.

Feeling “helpless,” Kharotai is coordinating with his local MP Colum Eastwood of the SDLP.

In a statement shared on Facebook on September 1, MP Eastwood wrote: “This evening I have been made aware that Sama Kharotai, the sister of Muhammad Edrees Kharotai, my constituent, has been abducted in Kabul.

“Following the fall of the Afghan capital to the Taliban, I made urgent representations on behalf of Muhammad and his family to senior British Government Ministers outlining that without intervention, these vulnerable women would be targeted by the new regime. We knew this would happen because their father was murdered by the Taliban for working as a government official.

“This family is in crisis tonight. They have been living in a tent on the streets of Kabul for over a week now, desperate to stay safe and the British Government has totally abandoned them.

"Now they are frightened, they don’t know where their sister is and they need immediate support.

“I am calling on Foreign Secretary Dominic Rabb to make this case an urgent priority. He needs to exhaust every diplomatic option right now to secure the safety of the Kharotai family before they lose their lives.

“I will continue to do everything I can for Muhammad and his family.”

This evening I have been made aware that Sama Kharotai, the sister of Muhammad Edrees Kharotai, my constituent, has been...

“Those calls have fallen on deaf ears. I’m hearing the exact same stories from MPs right across.

Tonight I’ve been made aware that Sama Kharotai, the little sister of my constituent Muhammad, has been abducted in Kabul.

I have made urgent representations to senior Ministers and I am appealing again to @DominicRaab to intervene in this case. This family needs help right now.

“It’s devastating. They should have known this was coming, they weren’t prepared at all.

“A woman like Muhammad’s family have been left in a devastating and difficult and dangerous position, but it isn’t as if they didn’t know this was coming. I don’t understand how given the fact that they had a deal done with the Taliban 18 months ago, how they weren’t preparing to get vulnerable people out long before now.“We provided phone numbers and everything to the Foreign Office and nothing was done.

“And now we’re seeing ISIS there, as well. It is an impossible position.

“Muhammad’s family have been living in a tent in Kabul, his four sisters and his mother. I just can’t imagine what Muhammad is going through today, but I know that there are many, many cases like this and many emails haven’t even been responded to by the Foreign Office.

“So, if the Foreign Office are telling us they’re doing everything they can, I just don’t believe them, frankly. They haven’t been doing what they should have been doing over the past number of weeks. They were not prepared. They did not have the resources in place.

“They were not ready for what was clearly coming and they have left these people in harm’s way.”

According to BBC, the Foreign Office said it will "continue to do all we can to deliver on our obligation to get British nationals and eligible Afghans out of the country while the security situation allows".

In a statement, it said: "More than 15,000 people including British nationals, our Afghan staff, and others at risk have been evacuated from Afghanistan by the UK since 15 August in one of the biggest operations of its kind in history."