Irish woman Aoife MacManus, who worked in the educational sector in Afghanistan, says she is happy to be safe but is heavy-hearted about what she leaves behind. 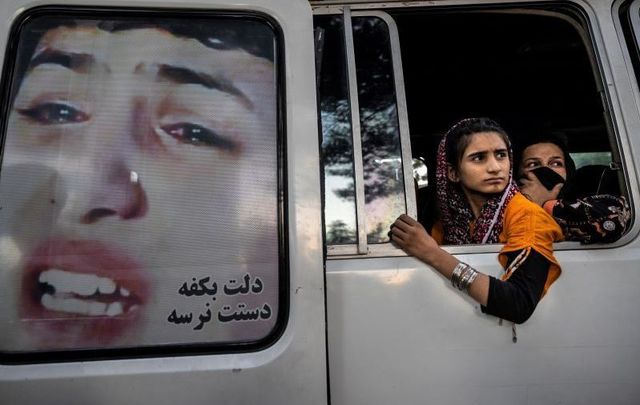 August 12, 2021: Displaced Afghans from the northern provinces are evacuated from a makeshift IDP camp in Share-e-Naw park to various mosques and schools in Kabul, Afghanistan. Getty Images

Aoife MacManus is one of three Irish citizens who were safely evacuated from Afghanistan on Thursday in the wake of a dramatic takeover of the country by the Taliban.

MacManus has made it to Pakistan after finally getting a flight out of Afghanistan on Thursday morning, RTÉ reports.

“So this morning, yeah, we left at dawn,” MacManus said in a video shared by RTÉ journalist Laura Fletcher on Thursday. The Irish woman had been working in the education sector in Afghanistan for two years.

“Quite mixed emotions about leaving, obviously," she said. "I’m happy to be safe, but very heavy-hearted about what we’re leaving behind.

“For now, we’ve just got to rest for a day or two and then get back home soon and see everybody then.”

Aoife MacManus speaks to ⁦@RTÉnews⁩ from Islamabad about how she feels now that she has safely left Afghanistan. More on tonight’s 9 o’clock news pic.twitter.com/Gc42czirn0

The Co Meath native further told RTÉ's Irish-language program Nuacht that she got to the airport in Kabul on Wednesday night with help from the Taliban, who are escorting foreign nationals leaving Afghanistan.

Earlier in the week, photos and videos emerged of desperate Afghans swarming runways and clinging to the sides of planes at Kabul Airport hoping to escape.

“The difficulty at the moment is to get as far as the gate and we managed to do that and the American army came and they let us in,” MacManus said.

The Irish woman waited more than six hours on the plane before being able to depart at dawn due to a curfew imposed by the Taliban that extends to flights.

“I’m very grateful that I was able to do that. I stayed at the airport overnight waiting on the airplane and we left at dawn,” she added.

On Thursday, the Irish government was working on evacuating another 36 people who want to leave Afghanistan.

“The process is slow and fluid, in terms of circumstances changing all the time,” Ireland’s Minister for Foreign Affairs Simon Coveney said RTÉ’s Radio One on Thursday.

“The truth is that a lot of the complications around the perimeter of the airport isn’t necessarily caused directly by the Taliban. Of course the panic there is caused by the Taliban being in charge, but it is the desire of many thousands of Afghans who want to try to get on flights and are trying to force their way into the airport.

“With each day that passes, we get a slight change in numbers, but the good news is three have been successfully evacuated.”

Coveney previously confirmed that Ireland would be issuing 150 humanitarian visas to Afghans, though expected that number to change as the situation continues to develop. Irish Aid has also announced €1 million in humanitarian funding to Afghanistan as part of a global appeal issued by the UN High Commission for Refugees (UNHCR).

MacManus has been in touch with her family at home in Ireland who eagerly await her return.

"We have spoken to her this morning and she is also happy, safe, relieved, and very emotional," her father Ray MacManus told The Irish Examiner. "I think she is catching up on some much-needed sleep now.

He said: "No planes were allowed to leave Afghanistan before dawn so as soon as the sun came up this morning, she left Kabul on the one-hour flight to Pakistan.

"We don't know when she will get back home to Ireland but we are just so happy she is now out of the country."

Ray said he and his family got "little if any sleep" the night before, but that with Aoife out of Afghanistan, "it feels now like a huge weight has been lifted from us."

The family has a "huge sense of gratitude" who offered their support and hope in recent days, and noted that their thoughts are with "those other poor people who haven't been so lucky yet and who are still trying to get out of Kabul."

Earlier this week, Aoife said she was looking forward to a pint of Guinness upon her return to Ireland, which is now closer than ever.