The new Aisling Irish Community Center in New York is almost ready to launch! Built by the community for the community, donations are still welcome. 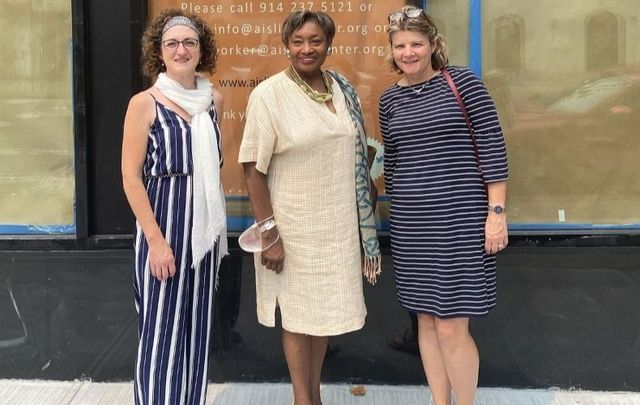 The Aisling Irish Community Center was established in the heartland of Yonkers and Woodlawn on McLean Avenue just over a quarter of a century ago. Since then, the center has grown steadily to become an integral part of the Irish American community in the tri-state area.

In 2018 a major milestone was reached when the building was purchased, thus securing a permanent home for the center. The future looked bright and then Covid struck. That was a real game-changer.

The song “The Show Must Go On” chronicled the efforts of the late Freddie Mercury to perform despite impending difficulties. Well, that could be the signature tune for the Aisling Center as they kept the show going despite the confluence of the tough economic times and the constraints of the pandemic.

Sandra Feeney Charles, the executive director, along with her highly committed staff, though operating remotely, continued to provide most of its services and programs, especially to the needy and those most vulnerable in our community. Some people would be content to rest on their laurels, others to maintain the status quo, and more would dock the vessel in a safe harbor until the storm blew over. Not so the Aisling folks.

Though faced with a new mortgage and an aging building, they started an ambitious plan to expand and totally redesign the center to cater to the increasing demands for services and to provide quality community programs in a safe, spacious, and state-of-the-art facility.

The sporting adage, “When the going gets tough, the tough get going” attributed to Knute Rockne, the legendary coach of Notre Dame, was certainly the approach suited to these challenging times. By any criteria these were very tough economic times with bars, restaurants, businesses, construction sites closed or operating on a skeleton schedule.

Although an impressive $1.2 million had already been raised towards the purchase and renovation of the building, there was a projected shortfall of about half a million for the project. This presented a dilemma at a time when traditional in-person fundraising events could not take place due to Covid restrictions.

To overcome this, the Aisling Center devised a plan to raise the requisite funds by creating an online “Buy a Brick” campaign where donors could purchase a virtual brick for an amount compatible with their budget, ranging from $100 to $10,000. Purchase of a brick would be recorded for posterity, either on the virtual wall or the real wall contingent upon the donation amount.

In essence, the new Aisling Center would be built by the community for the community. The concept was simple – people could make a donation and record their names on a virtual brick on the wall, dedicating their donation if they so wished. Thankfully, the community responded generously to the appeal, and the virtual wall began to grow.

In tandem with this, a very committed group of businesspeople who had donated diligently and generously to a great variety of causes and concerns over the years came together to form a fundraising committee to assist with the campaign. From making personal donations to soliciting contributions from friends and acquaintances, this all-star team played the proverbial blinder and within six weeks they had scored their target of $500,000.

While funds were being raised, daunting figures were being presented about the cost of the project which entailed the complete refurbishing of the building from basement floor to ceiling and from wall to wall.  To help alleviate the financial cost, development manager Sean James invoked an old Irish true and trusted practice, namely the meitheal, whereby a group of neighbors would pool their talents and come together to help in the saving of crops or other tasks. Forks, rakes, shovels, and spades were the main tools of that era.

Granted in today’s world tools are vastly more specialized and sophisticated, but the core concept of volunteering is still as relevant and practical as ever.

In this instance, a group of Irish contractors representing the diverse specialties and skills of the building industry came on board to assist with the project. That entailed everything from roofing to flooring, including general contracting, demolition, masonry, steel, storefront, desk/cabinetry, kitchen cabinets, countertops, conference tables, plumbing/sprinklers, fire protection, TV/AV computer, electrical, HVAC, elevator, tiling, and painting. Many are donating their services free of charge, while others operate way below market standard or cost prices.

In addition, the cost-cutting was greatly facilitated by very generous donations of manpower and materials. Such phenomenal generosity has proven yet again that the modernized version of that old Irish custom, the meitheal, can still get the job done well, even in the 21st century. It also lends credence to the Aisling Center’s claim that the new building is a building built by the community for the community.

Also, in the modern world where strident individualism is too often the dominant philosophy, it’s nice to see that philanthropy and benevolence are alive and well in the Irish and Irish American community. While the generosity of the donors and contractors has been rightly noted and appreciated, I would be remiss if I did not also acknowledge the roles of fundraising/development manager James and Aisling Center Chairperson Caitriona Clarke as they steadily steered the project through its phases.

As the project draws to a conclusion, there is much work to be done before opening its doors in the fall. Donations to the “Buy a Brick” virtual fundraising campaign are gratefully accepted and can be made either online here, by mail, or in person at the temporary staff office located at 953 McLean Avenue, Yonkers.

In the meantime, the Aisling Center continues to operate its community programs and services, taking care of its senior population and providing valuable counseling services to those who need it. The Aisling Center Ceili Band and Ballad Group are going from strength to strength and many of our youth leadership Foróige group will be taking part in an exciting Mulcahy Scholarship program in Greenwood Lake later this month.

Team Aisling members are helping to keep the community on the move by facilitating weekly workouts and the Grateful Givers, who carried the mantle for our Feed the Homeless program during lockdown are making weekly trips to dispense much-needed food and toiletries to those down on their luck on the streets of Manhattan.

It has been claimed that the Irish built New York…well they are certainly making their mark in Yonkers also by helping to build the Aisling Center. The board and staff are grateful to the community for their continued support and patience and look forward to welcoming everybody back upon completion of the building.

There are exciting plans afoot, as there is a dual cause for a major celebration, namely a grand opening and of course the Aisling Irish Community Center’s 25th anniversary. What’s a better way to celebrate that major birthday than hosting a new, expanded, and state-of-the-art building for the community along the Emerald Mile.

In addition, an exciting commemorative 25th-anniversary event will be launched later this month that will give the New York community an opportunity to celebrate all that has been achieved at the Aisling Center. Inspired by Catherine Flood, former board member and founder of Team Aisling who has been deeply involved with the Aisling Center since its inception, rest assured that the birthday celebrations will be memorable and should not be missed.

As the turning of the key becomes more imminent, check the Aisling Irish Community Center's Facebook page for upcoming events. You won’t be disappointed I assure you!