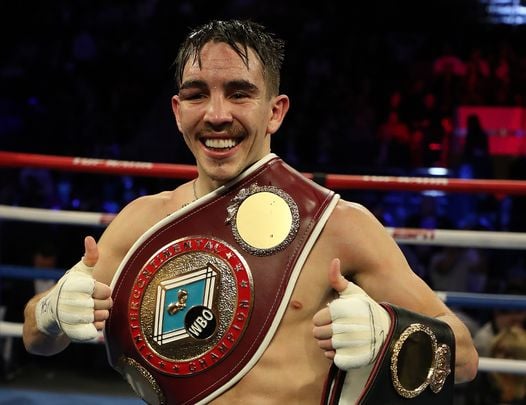 Since the Good Friday Agreement, there have been over 4,700 instances of suicide in Northern Ireland. To put it in perspective, more people have died by suicide in the last twenty years of peace than in the thirty years of vicious war known as The Troubles.

Petrol bombs, riots, and gunshots no longer dominate everyday life, but tragedy continues to destroy communities. The North of Ireland is fighting against a challenger way above its weight class. Luckily, the region has a formidable champion in Michael Conlan, whose professional boxing career shows enormous promise, and whose fight against the mental health crisis has only just begun.

In 2018, Michael Conlan stood before a packed crowd in the Hulu Theater at Madison Square Garden. He had a few professional fights under his belt, but an amateur record of 248-14 made him one of the best pound-for-pound fighters in the world. Conlan's boxing ability was evident: he has a unique calmness that somehow slows time, he easily evades punches with his strong defensive instincts, and his uncanny awareness of in-ring distance makes him mobile and precise.

Conlan utilized his vast skill set, and the support of a riotous crowd to emerge victorious over David Berna. His career took off from there.

"I put my whole heart into it," Conlon reflected in an interview with the author, "and I got to where I want to be." Still, he remained awestruck by the support of his community back home in West Belfast.

"It's incredible that so many made the trip," he declared, "as you know yourself, we don't come from a wealthy area, so they had to spend their hard-earned money to get there."

As a nine-year-old sitting in St. Gall's Primary School in West Belfast, I never envisioned that St Patrick's Day in 2018. I did not think I would be taking a break from my doctoral studies to witness my schoolmate sellout Madison Square Garden. Despite the fame and fortune, Conlan remains the self-described "small kid" from Belfast.

I recently interviewed him to discuss the mental health crisis that plagues the region. Immediately, it felt like we were back in the playground in St Gall's staring at the "Peace Walls." His passion for our community was fiercely evident as we discussed the increasing suicide rate, poverty, drug use, and his boxing career. Of course, we spoke about his victory over David Berna in 2018 and his plans for the future.

Read more: Expert warns of a "blizzard" of cocaine in Galway

Now, in 2020, Conlan is set to headline Madison Square Garden again, and he hopes to add a world title to list of achievements in the subsequent months. Nonetheless, he believes that his most significant accomplishment will be outside the ring — a victory in his battle against the mental health crisis and suicide epidemic that is tormenting Northern Ireland.

There are many reasons for the development of this mental health epidemic, including but not limited to, poverty and drug use.

In 2018, 43 percent of children in West Belfast were living in poverty, and 61 percent of impoverished parents admitted to skipping meals. Similarly, 4 out of 5 parents in the region had to borrow money to pay for meals and clothing for their children.

Poverty has advanced hand-in-hand with increased drug use among young people. Between 2006 and 2019, the police reported a threefold increase in the seizure of drugs from 2,590 to 7,561 incidents.

Conlan understands this harsh reality more than most. He knew many "drug addicts or frequent drug users" on Springfield Road. He thought about "messing around" with drugs, but his parents and his older brother, Jamie, kept him on the "right track." Unfortunately, he has lost several friends and former neighbors to suicide, crime, and drug addiction since his days as a teenager in Belfast.

The region's woefully underfunded mental health services cannot handle this increase in addiction and mental illness. Stormont spends 4 percent of its annual health budget on mental health. At the same time, England, Scotland, and Wales allocate as much as 12 percent to these issues. A lack of resources has led to longer wait times for access to therapists.

Conlan frustratedly asserted, "people are waiting seven months to see a mental health professional, but I would like to see that cut down to four weeks." Indeed, the average wait time to see a therapist is 30 weeks, which is far longer than the health department's aim of 13 weeks. Conlan firmly believes that any waiting time is unacceptable and would "ideally like people to be able to see a professional in one day."

The stark rise in drug addiction and suicides have gravely affected Conlon, despite the recent success of his boxing career. He is tired of "mental health being invisible," and he does not want "suicide to become a normal experience for kids."

Therefore, he decided to use his contacts as a celebrity to strike a vital blow in this fight. Conlan "literally went down" his "contact list and texted every famous person" to gain publicity for the current crisis. Celebrities Carl Frampton, a renowned professional boxer, and Snow Patrol frontman Gary Lightbody joined him in voicing their concern. This outcry forced Robin Swann, the Health Minister in Stormont, to declare suicide prevention a "top priority."

Nevertheless, like any great boxer, Conlan knows the difference between winning around and winning the fight. Conlan plans to meet with local politicians to force them to come up with an action plan. He wants Swann to double the budget for mental health, and he believes that the threat is too imminent for politicians to sit around in committee meetings.

He contends that "it is good to have the politicians on board, but they spend too much time in their wee groups without getting much done." Stormont committees often fall apart due to sectarian and party divides. Stormont did not have a functioning executive for over 1000 days because of these conflicts. "We do not have time to wait in groups. This is not a Catholic or Protestant issue. It is a whole bloody country issue," Conlan says.

Outside of working within the system, Conlan is trying to raise money for mental health charities and to create activity days for young people. He wants to ensure the "soldiers on the ground," such as Action Mental Health, Aware NI, Barnardo's NI, and Inspire Wellbeing, are fully funded. Conlan is also hoping to develop a project tentatively titled "Revive," which he believes will serve as a symbol for renewed hope in the region. Revive will "have events every few months in different areas such as Revive Belfast or Revive Derry" to "help people talk about their problems, meet people with similar issues, or play sports."

Echoing Conlan's cross-community activism, the organization's events would be open to everyone. Still, it will "obviously feature some boxing if people want." Activity days or "fun days" have often been a communal bonding experience in Ireland. Conlan's idea would revolutionize the concept because no organization has successfully promoted largescale cross-community projects on such a regular basis.

Those wondering if Michael Conlan can force change in mental health policy should note that this is not his first bout as an activist. In 2016, he singlehandedly changed the landscape of Olympic boxing forever. After controversially losing to Vladimir Nikitin in a quarterfinal bout at Rio, Conlan removed his vest and raised his middle fingers to each of the judges. It was an iconic moment that defined the beginning of his professional career.

However, his actions afterward were far more significant. He hounded the AIBA, the governing body for amateur boxing at the time, for being "cheats." This forced the International Olympic Committee to investigate corruption within the organization. As a result, all 36 AIBA judges who officiated in Rio were suspended, and the organization has been widely discredited. Pondering these events from his home, Conlan stated, "I guess you could say I brought down the corrupt amateur boxing system in the Olympics." He did, and it was a knockout blow.

Read more: Drop in number of Irish children drinking, smoking and having sex

Despite transforming amateur boxing and working with politicians to tackle this suicide epidemic, Conlan does not consider himself a visionary. While he sat in his home, I asked: "do you think of yourself as an activist after weighing in on corruption at the Olympics and the mental health crisis at home?" He humbly laughed it off before replying, "I have never thought of it that way, but you could say so." After a pause, he further reflected, "I don't have superpowers or anything, but I want to be able to tell my daughter that I made the world a better place."

We discussed his post-boxing career, and the possibility of following in the footsteps of Manny Pacquiao, Filipino boxer turned politician. Conlan noted that he might "decide to run for office in Belfast after boxing." Seemingly unaware of his status as a local icon, he suggested that he could be a representative in the city council. Yet, his thousands of social media followers and the multiple murals of his image throughout the city indicate that he could easily obtain a much more significant political role.

In boxing and politics, I would not bet against him. He passionately believes in making his community a better place, and he has a combination of humility, that is rare in sport and politics, and a relentless determination to succeed. He lets his actions speak for him. These qualities will most likely carry him to a world title in the ring and, more importantly, a victory over this suicide epidemic.

Going forward, Conlan hopes to use boxing as a platform to highlight mental health crises, and he encourages people to donate to mental health organizations in Ireland. Top Rank, the boxing promotion, has marketed Michael Conlan's rise in boxing as the "Conlan Revolution," and the revolution is barreling forward at lightning speed. Conlan is currently undefeated in 13 professional fights, and WBO and WBA rank him within the top three featherweights in the world. Yet, the revolution will also encompass political activism as Conlan insists, "this is not a flash in the pan."