The European Union and the Good Friday Agreement: the EU’s involvement in peace

It has been through Ireland’s increasing involvement in Europe that the wounds of the Troubles have had the time and space in which to heal. 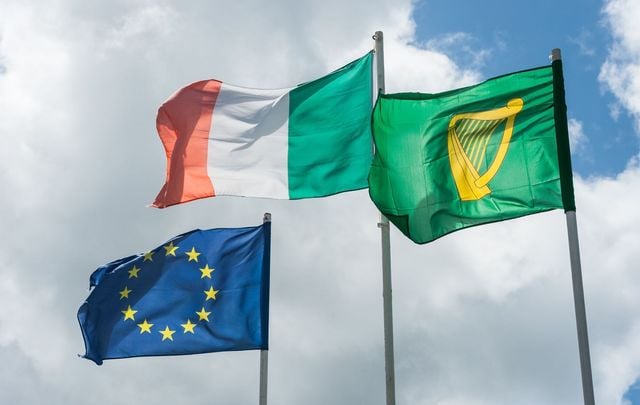 Irish and European flags blowing in the wind. Getty

At the end of the First World War, the official war artist and Irishman, William Orpen, was commissioned to paint the signing of the peace treaty at Versailles.

What his employers, the British Ministry of Information, had hoped would be a memorialization of the Allies’ victory, became, in Orpen’s hands, a subtle critique of the peace conference.

Through the fractured reflection of the sky in the mirrors in “The Signing of Peace in the Hall of Mirrors” (1919), Catherine Marshall and Fintan O’Toole argue that Orpen hinted at “the frailty of the agreement.” Frailty worsened by the US Senate’s refusal to ratify it and the US government distancing itself from most of its provisions.  The treaty designated winners and losers, assigning blame on Germany for the conflict under Article 231, the so-called “guilt clause.” It also imposed crippling financial war reparations, it lost significant parts of territory, colonies and limitations were placed on its military capabilities. Over the next twenty years, its unpopularity was capitalized on by the far-right in Germany to destroy German democracy ultimately the fragile European peace.

The Signing of Peace in the Hall of Mirrors, Versailles, 28th June 1919. Image: WikiCommons/Public Domain.

It is in this context that we can understand the resolution reaffirming support for the Good Friday Agreement (GFA) which passed by unanimous voice vote in the US House of Representatives on Tuesday, December 3. Republican Congressman Peter King, who co-sponsored the resolution with Democrat Thomas Suozzi said, "It is imperative that the United States do all that it can to not only support the Good Friday Agreement but prevent any return of a hard border.” Suozzi called the GFA “a momentous achievement that has been largely responsible for the relative peace over the last two decades." For these bi-partisan lawmakers, failure to meet the Agreement’s obligations in a future US-UK trade deal would jeopardize that very peace.

While the US’s role in brokering the agreement has been justly recognized, arguably the EU’s involvement has gone under-reported and under-acknowledged perhaps. Through the Brexit negotiations, however, maintaining the provisions of the Good Friday Agreement has been front and center of the EU’s priorities. This is not just because the EU is a guarantor of the treaty, but because it reflects the very same principles and processes on which the EU itself is founded; the rule of law, cross-border cooperation, and post-conflict reconciliation and peace.

Addressing a joint sitting of the Houses of Parliament at Westminster in 2007, the then Irish Taoiseach, Bertie Ahern, noted that joint membership of the EU since 1973 “has served as a vital catalyst for the building of a deeper relationship between our two islands.” The significance of an Irish leader addressing the UK Parliament should not be overlooked. After a century that saw rebellion, war, partition, economic and civil strife, cordial relations between the neighboring states were hard-won. Without the EU, moreover, it is likely they may have never been achieved. 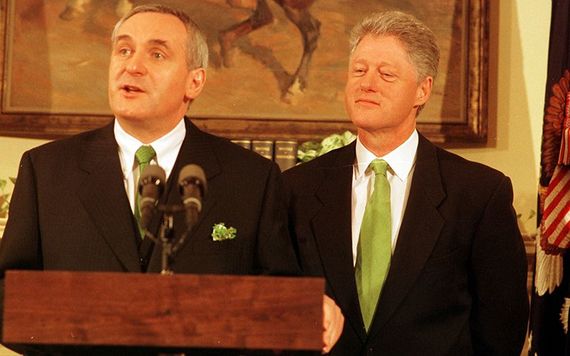 Through membership of the EU’s institutionalized and rule-bound culture, UK and Irish leaders could meet as equals, gradually improving relations that had historically been based on inequality and mistrust. This greater understanding was found on the fringes of regular EU meetings and summits throughout the 1970s and 1980s.

The Milan European Council in 1985 is widely regarded as momentous for Europe as the summit where the deadline and program for the completion of the single market were set. It was doubly momentous for the island of Ireland. First, the realization of the single market in 1992 effectively removed customs posts along the Ireland-Northern Ireland border. More immediately, however, it was the venue at which the then British Prime Minister Margaret Thatcher agreed to sign the Anglo-Irish Agreement later that year.

In the words of historian John Bew, this accord was “a triumph of persistence and backdoor diplomacy for the Dublin government.” It gave the Republic an official consultative role in Northern Irish affairs and provided for intergovernmental cooperation on security, legal and political matters.

In addition to this, over time the EU established an interest of its own in Northern Ireland, directing significant investment into the region. It provided funding under mechanisms such as the European Regional Development Fund and INTERREG programs, both of which promoted cross-border cooperation and integration. The European Commission also established the “PEACE programme” and has spent over €1.5bn on peace-support programs since 1995 in the North and border region. The Commission’s lead negotiator on Brexit, Michel Barnier, was responsible for the PEACE programs when he was Commissioner for Regional Policy from 1999 – 2004. He has always stressed the importance of the EU’s goal in protecting peace in Northern Ireland.

Most pertinently, however, in both its language and structure, the EU offered a model of a cross-border peace project that relied on reconciliation, cooperation, and mutual understanding. Former MEP, and Nobel prize winner, John Hume, regularly told the story of his first trip to Strasbourg in 1979, “I went for a walk across the bridge from Strasbourg to Kehl. Strasbourg is in France, Kehl is in Germany…I stopped in the middle of the bridge and I meditated. There is Germany. There is France.”

Hume was keenly aware of the fact that 30 years before “25 million people lay dead across our continent.” To speak then of a bridge connecting Germany and France, rather than a border dividing them, would have had him “sent to a psychiatrist.” He saw how the institutions of the EU were created to respect the continent’s diversity, and to subdue the conflicts that could arise from ethnic, racial or religious differences. Within these institutions, Europeans spilled sweat rather than blood and “by doing so broke down the barriers of distrust of centuries.”

The institutions of the Good Friday Agreement were created in this image. For instance, the d’Hondt system used for allocating political offices according to seat share in the European Parliament is also used for allocating ministerial office to parties in the Northern Ireland Assembly. In seeking models for promoting reconciliation between previously warring communities, those drafting the GFA could simply turn to Europe and what Hume regarded as “the best example in the history of the world of conflict resolution.”

Although William Orpen’s painting The Signing is supposed to present a historic moment of resolution, the historic fallout of the event would undo the peace it was meant to achieve. The treaty proved to be punitive, apportioning blame and levying humiliating reparations on a defeated Germany. Within twenty years its provisions had been partially responsible for a new European cataclysm. In contrast, the GFA acknowledged no victory for either side. While there has been much to regret about the Brexit process, one positive has been the almost continuous respect paid by all sides to the dangers of tearing up this agreement.

Essentially it is a peace treaty and a working roadmap for conflict resolution. Over two decades after it was signed, respect for its tenets in the EU, the UK and in Ireland may have bedeviled the Brexit negotiations, but it has also limited the possibility of no-deal. US lawmakers have been steadfast in their support. So has the EU, despite being composed of 27 different states.

When Ireland joined what was still the EC in 1973, then Taoiseach, Jack Lynch, quoted another Irish war correspondent, the politician, writer and soldier Tom Kettle. Though he died before Ireland was effectively partitioned into two states, Kettle saw that the island’s future lay in Europe. Writing in 1910, he argued that for Ireland “to become deeply Irish, she must become European.” It has been through Ireland’s increasing involvement in Europe that the wounds of the Troubles have had the time and space in which to heal.

Noelle O Connell was appointed Executive Director of European Movement Ireland in April 2011.  She is the public spokesperson for the organisation and she regularly makes appearances on national and international media to give commentary on the ongoing Brexit negotiations, as well as the latest developments across the EU and in Ireland. Prior to leading European Movement Ireland, Noelle provided business development training, education and public affairs consultancy to a wide variety of both private and public sector clients.

About European Movement Ireland: Founded in 1954, European Movement (EM) Ireland is the longest established Irish NGO working on European affairs. An independent, not-for-profit, membership organisation, EM Ireland works to develop the connection between Ireland and Europe.  We facilitate links between all sectors of Irish society and the EU, through advocacy campaigns, education programmes, training courses, information briefings and networking events. For more information, visit www.europeanmovement.ie or to learn about becoming a member to support the work of EM Ireland across the world, click here.