Five-year-old Maeve McNelis, who was diagnosed with neuroblastoma when she was 18 months old, flew to Disney World with her family thanks to the Make-A-Wish Foundation. 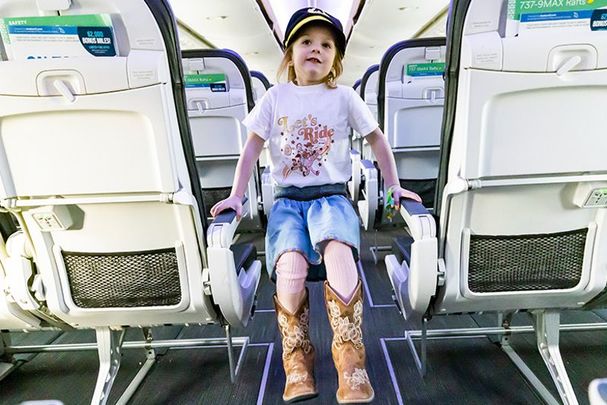 Maeve McNelis, a five-year-old Irish American girl who has battling aggressive Stage 4 cancer since she was just 18 months old, saw her dreams come true last month when she visited Disney World in Orlando thanks to the Make-A-Wish Foundation.

McNelis, from Seattle, was diagnosed with neuroblastoma when she was 18 months old and has spent most of her young life in hospital.

"Her treatment was really intense cancer that attacks the nervous system. She had a tumor, it was very high-risk, stage four, and aggressive," Maeve's mother Bethany McNelis told  CBS Austin.

However, the five-year-old is now "doing great" and celebrated by jetting off to "the Happiest Place on Earth" in Orlando, Florida.

Maeve arrived at Seattle-Tacoma Airport with her parents Bethany and Ryan and her brother Rowan on November 8 to take an Alaska Airlines flight to Orlando.

Dressed as a cowgirl, Maeve walked through a country farm featuring backdrops of cows and horses that had been set up especially for her at the airport.

She received another surprise when she arrived at the airport: her uncle Joey McNelis, an Alaska Airlines pilot, was flying the plane to Orlando. Her uncle Joey allowed Maeve to greet passengers and make announcements over the PA system.

Both of Maeve's parents are Alaska Airlines pilots, while her grandfather Jim is a retired captain. Her grandmother Joleta is a retired flight attendant.

However, Maeve harbors no ambitions of becoming a pilot herself, pronouncing that she wants to be a cowgirl.

It was an honor to care for 5-year-old Maeve as she traveled to Orlando with @MakeAWishAKWA after a brave battle with cancer. Maeve’s parents (both Alaska pilots!) flew in the cabin while Maeve’s Uncle Joey was the First Officer flying the plane. Read more https://t.co/0ZrpDqC9Ej pic.twitter.com/EjN7ITUSuu

Bethany said it was "really special" to be on the flight to Orlando.

"Finally we have this time to celebrate. Short term, let's have some fun. Long term, I hope it sparks generosity in my kids that they learn a lot from Make-A-Wish," Bethany told CBS Austin.

Maeve's wish was also a special landmark for Make-A-Wish Alaska and Washington, marking the 8,000th wish since the organization was founded in 1986.