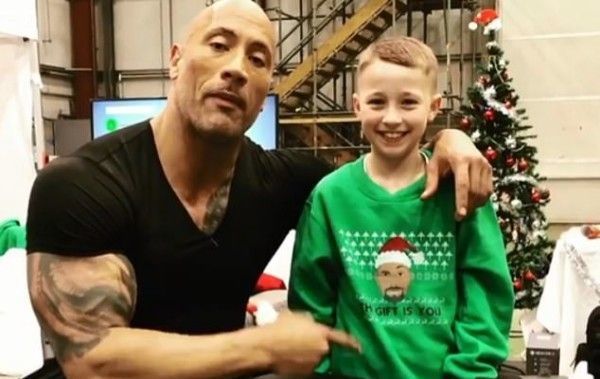 Dwayne ‘The Rock’ Johnson truly is a real-life superhero

In a YouTube video, Johnson shared how young PJ, Cameron, and Lucy were brought by to the UK filming location of Hobbs and Shaw, the spinoff movie of The Fast and the Furious that he's currently working on.

While the children initially thought they were just getting treated to some video games and a tour, they could hardly contain their excitement when The Rock himself dropped by.

Johnson made sure to spend plenty of quality time with the sick children playing video games, taking pictures, and even bringing co-star Jason Statham in for a visit.

Make a Wish Day on set of HOBBS & SHAW. Look at PJ’s face light up like a Christmas  tree with a smile when I start talking. Trust me, I don’t ever take these smiles for granted. These kids have gone thru some tough times man and they’re way stronger than I’ll ever be (and ironically, I’m their hero) and this will always be the best part of my fame. I will fish all day long for compliments!  #MerryChristmasPJ #StayAwesome #StayStrong

The day out was organized in part by Make-A-Wish Foundation Ireland, which helps grant the wishes of seriously ill children. Irish 9-year-old PJ, a benefactor of Make-A-Wish Ireland, is currently battling Ewing’s sarcoma.

PJ’s an awesome and special boy. So cool that I got a chance to hang out with him!! Thanks PJ! @MakeAWishIntl https://t.co/ug0Zyf33Qs

As if visiting with the superstars wasn’t enough, Johnson treated the children to The Rock swag, a year’s worth of free video games, and, of course, his ‘DJ signature chocolate chip cookies.’

Read More: Conor McGregor’s new pad and his bromance with The Rock

Both PJ and his mother said the day was a “dream come true.”

Watch as The Rock welcomes PJ and other children to set here: