Irish train driver Patrick Murray and his soon-to-be wife Megan took the DART to their wedding ceremony in Dublin. 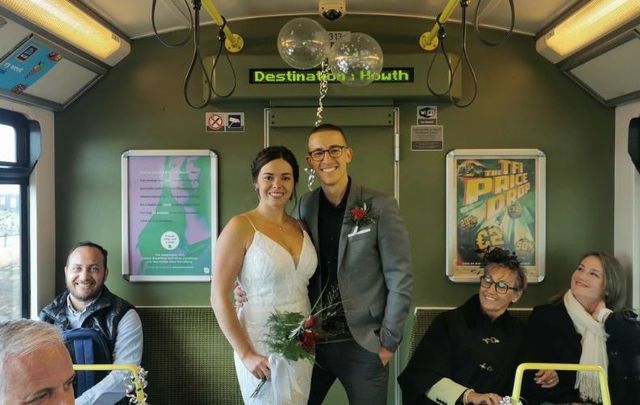 Patrick and Megan riding the DART to their wedding in Dublin. Iarnród Éireann @IrishRail, Twitter

Patrick Murray, a DART (Dublin Area Rapid Transit) driver, and his bride Megan took a train ride to their wedding in Dublin this week, much to the delight of commuters.

"Love in motion!!" Iarnród Éireann (Irish Rail) said on Twitter while sharing photos of Patrick and Megan en route to the registry office.

Murray, who has worked with Irish Rail since 2019, and his bride-to-be Megan boarded a Howth-bound train as they headed to the registry office on Dublin's Grand Canal Street to tie the knot on Thursday, September 29.

One of Irish Rail's pictures shows the couple sitting in the driver's seat, and another shows them posing amid happy commuters.

"Congratulations to DART Driver Patrick & his beautiful wife Megan, who traveled to & from their wedding ceremony by DART today.

"Wishing them a lifetime of happiness."

Love in motion!! Congratulations to DART Driver Patrick & his beautiful wife Megan, who travelled to & from their wedding ceremony by DART today. Wishing them a lifetime of happiness ❤️👰‍♀️🤵‍♂️ pic.twitter.com/pdUu2ffDGL

Irish Rail's tweet has been liked more than 4,300 times and has received plenty of comments from people passing on their best wishes.

"Brilliant, that's the way to do it. Lot cheaper than a limo. Congratulations," One Twitter user wrote.

"All the very best to the happy couple," said another well-wisher.

Murray, who was born in Brazil and raised in Miami, met his Canadian wife Megan through a mutual connection. The couple now lives together in Greystones in Co Wicklow.

The couple then celebrated their marriage with family and friends at Café en Seine on Dawson Street, the Irish Independent reports.