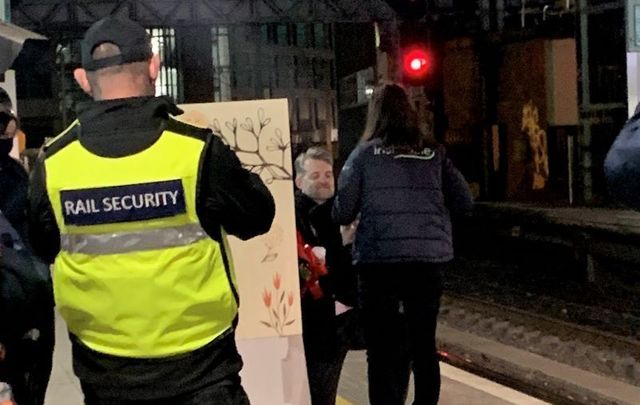 Train driver Paula Carbó Zea was treated to a surprise proposal by her boyfriend Conor O'Sullivan at Pearse Station in Dublin. Courtesy of Clodagh Maher

Conor O'Sullivan got some of the crew at Irish Rail involved to pull off a sweet, surprise proposal for his girlfriend, train driver Paula Carbó Zea.

Irish Rail saw to it that a special camera was installed in train driver Paula Carbó Zea's train as she pulled in into Pearse Station in Dublin on December 15.

The video shared by Irish Rail shows that as Paula pulled into Pearse Station, she was welcomed by successive posterboards that read "Will you marry me?" lining the platform.

Paula's boyfriend Conor O'Sullivan, smiling ear to ear although looking a bit nervous, waited beside the last poster with a massive bouquet of flowers and what appears to be the engagement ring.

As Paula met him on the platform, the couple's song "You Make Me Better" by James Blunt was playing for all to hear, and Conor got down on one knee to pop the big question.

Paula nods before Conor springs up and lifts her in the air in a heartwarming embrace as bystanders start to cheer.

💍 Congratulations to Paula, our DART driver and her fiancé Conor on their engagement - and here’s how Paula saw it unfold as she was driving a northbound DART into Pearse!
🎉 Thanks to DART and Pearse Station teams for helping Conor to make it happen! #pearseproposal https://t.co/RBis8cVCAf pic.twitter.com/YZbHlm74Am

The sweet scenes were also captured by Irish woman Clodagh Maher, who happened to be on the platform after a long shift at work:

In a tweet afterward, Paula thanked everyone for making the big moment so special:

Thank so much for sharing this moment. I was so surprised and at the same time excited. Thank you everyone who was envolve to make this moment beautiful and perfect 😊😍😍 https://t.co/hjX5PPBhS7

Paula, an engineer, and Conor first met three years ago about a month after Paula left her native Barcelona to take up a job as a train driver with Irish Rail.

“I wanted to improve my English,” Paula told The Irish Times, “then I met him and I have stayed here.

"I love Ireland," she added, "but I wish it would rain less.”

Conor told Newstalk the day after the proposal: “The only way I could make it a surprise was to do it while she was at work.

“You kind of know there’s something is going on when you’re preparing a proposal. She kind of had an idea. So if I took her out for dinner somewhere or anywhere special, it would have been clear what was happening."

Conor said a surprise proposal “was the goal” and he got some of Paula’s workmates involved with his plan.

“I’m a lucky man,” Conor acknowledged after Paula said yes. "I think it's kind of nice - we've had a tough year, not just ourselves, I think everyone's had a tough year - so it's nice to end the year on a positive note with a bit of hope and joy."