Shannon Burke traveled to her great-great-grandmother's village in Co Kerry to have her dream Irish wedding. 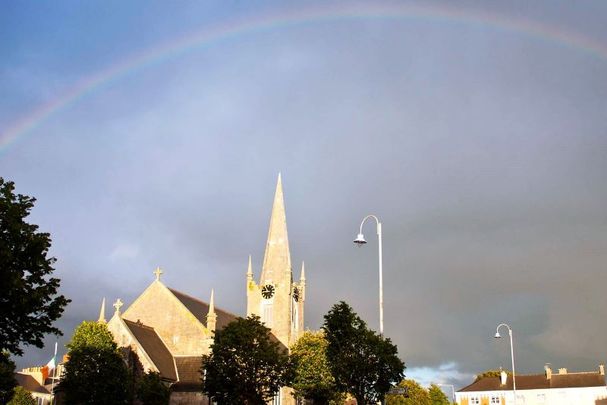 A rainbow over Listowel in Co Kerry. Ireland's Content Pool

A New York bride was so captivated by family stories of her Irish immigrant great-great-grandmother that she decided to get married in her ancestor’s Co. Kerry hometown.

Kate McCoy emigrated from Listowel, Co Kerry, to Albany, New York, in 1872. Shannon Burke, a 29-year-old solicitor, visited the North Kerry town in 2001 after having heard stories all her life about McCoy from her grandmother.

When Burke became engaged to Corey Gaul, 29, in 2014, they decided the famous writers’ town would be the perfect destination for their wedding, the Irish Independent reports.

“My mother’s grandmother, who lived to be 103 years old, always talked about her mother, Kate McCoy who came to America from Listowel,” said newlywed Shannon.

“In the summer of 2001, my family traveled to Ireland and we were sure to make a stop in Listowel to see where our people came from. We loved the people and the landscape and the small-town charm.

“I had always said I did not want a big wedding, just a dinner party with family and a few friends.  My husband, on the other hand, comes from a big family and envisioned a big party.

“I knew I’d have no trouble convincing Corey to marry in Ireland because he has strong Irish roots; therefore, once the decision was made to have a destination wedding, Listowel was the place,” she said.

The couple, who have been together since 2012, wed in an intimate ceremony in St Mary’s Church in Listowel.

The ceremony was attended by 83 of the couple’s closest friends and family.

“All of our guests traveled to Ireland from the United States and they were so thrilled to be in Ireland for the wedding,” she said.

“Most of our guests were able to make an extended trip out of it, with many of them traveling around Ireland and other parts of Europe in conjunction with their trip to our wedding.

“Having a rather large group come into a town like Listowel created the perfect environment for our guests to really get to know each other and spend time together. In addition, it allowed Corey and me to actually spend time with our friends and family; we couldn’t cross the street for a pint without running into one of our guests and that is exactly what we had hoped for,” she said.

“Though the idea of planning a wedding from across the Atlantic was originally daunting, my mom was so instrumental in getting each detail of the wedding planning exactly right.

“Everything was arranged via email and telephone and we are still amazed at how perfectly everything turned out.

“The staff at the Listowel Arms, particularly Patrice O'Callaghan, are utter professionals and simply top-notch.

“I was really nervous the day of our wedding and I had been told to just expect and accept that something will go wrong on the big day.  I can honestly say that everything went even better than we had hoped,” said Shannon.

“I got my wedding dress at Lovely Bride in the TriBeCa neighborhood of Manhattan.  It is the 'Cassandra' gown by Sarah Janks,” said Shannon.

“The Listowel Arms looked absolutely gorgeous and every detail was executed perfectly.  For dinner, our guests had the option of selecting roast rack of lamb, fillet of Atlantic salmon or roast sirloin of beef.  Our wedding cake was made by Michelle O'Connor at the Lane Cottage.

“Our wedding band was The Love Junkies and they kept everyone on the dance floor the whole night! When the music stopped, those still standing, including myself, my new husband, as well as my father, spilled over the hotel bar at the Listowel Arms and kept the party going until the very wee hours.  It was truly unforgettable and we are still glowing,” she said.