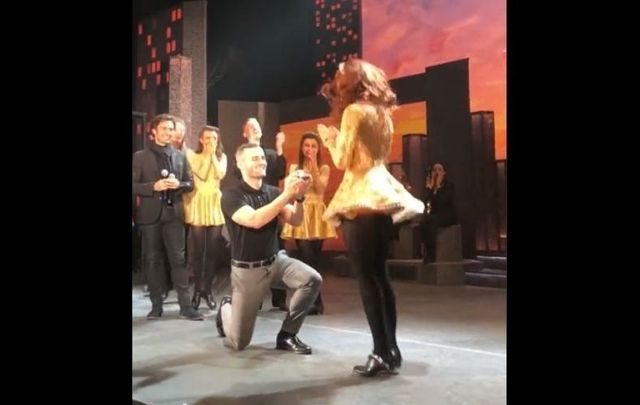 Irish dancer Owen Jones got down on one knee in front of his girlfriend Meadhbh Kennedy on stage after the finale routine of Riverdance. Riverdance, Instagram

Meadhbh Kennedy, the principal Irish dancer of Riverdance’s 25th anniversary tour, got the surprise of her life when her beau and fellow Irish dance star Owen Jones appeared onstage during the production’s finale at London’s Eventim Apollo theater on December 4, 2021.

“These guys didn’t know I was coming out here until just now so they’ll be a little bit as shocked as you are right now,” the former lead dancer and Dance Captain with Riverdance told the audience. Moyles thanked the audience, who had tickets for close to two years, for being in attendance, as well as the cast and crew for their dedication and determination.

“I know Meadhbh here, your boyfriend is in the audience, right? Yeah? His name is Owen. Owen, are you out there?”

Owen then booms in over a microphone, walking in from the back of the stage to great applause.

“I’ve got a few things I’d like to say,” Owen says, putting his hand on Meadhbh’s waist.

Owen says how he and Meadhbh first met six years ago while performing in another Irish dance production, Heartbeat of Home. The two continued their relationship, despite conflicting touring schedules after she was cast in Riverdance.

“I’ve never held you back and I wanted you to achieve your dream - boy was I right to, because look at you now.”

The couple must be big fans of Irish singer-songwriter Dermot Kennedy because Owen made sure to include some of his lyrics in his romantic speech: “Now that the world is getting back to some sort of normality, we can all see that better days are coming. Watching you up here, you should be so proud. If only you could see yourself in my eyes, you’d see you shine.”

He continued: “I can honestly say that every single moment with you has been an absolute high.

“I wanted to make this as special as possible, and make this an evening we will not forget, and what says I love you more than declaring it in front of three thousand strangers?” The audience and cast erupted into enthusiastic applause.

“I wanted to ask you a very important question, one in which I hope that when we look back on this day you couldn’t stop smiling like the whole way home.”

Owen then drops to one knee and takes Meadhbh’s hand in his. Her overjoyed reaction jumping up and down is a sure sign that her answer was a resounding “yes!”

As is only right, Owen then joined in the cast for the world-famous Riverdance finale step, joining hands with his beaming fiancee.