In 1994, Riverdance debuted at the Eurovision Song Contest

On April 30, 1994, the world of Irish dance changed forever and one of the most famous Irish brands in the world, Riverdance, was unveiled. 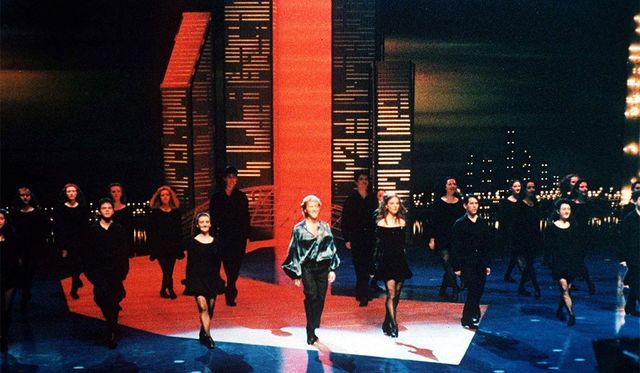 April, 1994: Michael Flatley and Jean Butler during the perfromance of Riverdance the Show at the Point Theatre in Dublin. Riverdance, YouTube

In light of its success at the Eurovision Song Contest, Riverdance was expanded to a full stage production that debuted at The Point Theatre in Dublin on February 9, 1995.

The five-week run of the first-ever Irish dance show broke records with sales of over 120,000 tickets.

Since then, Riverdance has played over 11,000 shows, been seen live by 25 million people in over 467 venues worldwide, in 46 countries over six continents. On TV three billion people globally have witnessed the amazing show.

It all began with the interval performance at the 39th Eurovision Song Contest. The piece began with the haunting vocals of the choral group Anúna followed by the arrival onstage of Jean Butler, emerging from a traditional Irish cloak to herald the beginning of a whole new style of Irish dance.

Michael Flatley, who would become better known as “The Lord of the Dance,” burst on stage, unlike any Irish dancer ever before. Their style and the onstage battle between the dancers and drummers brought something new to the Irish dance floor.

Next, Irish dancers flowed onstage in a perfectly synchronized troupe arriving with a determination and energy never seen before in Irish dance.

Produced by Moya Doherty, with music from Bill Whelan, and choreography by Michael Flatley and Jean Butler, the act seemed to eclipse the main event and lit a fire that would fuel the creation of the full stage show only nine months later – a fire that continues to burn to this day.

Riverdance continues to entertain more than two decades later. In 2014, during a special 20th-anniversary tour of Riverdance, one of the show's lead dancers Maggie Darlington told The Scranton Times that she had dreamed of the show since she was a toddler.

The 26-year-old also told the local newspaper that while the show has evolved over time, the essence stays the same.

“I think the dancing style has changed ... it’s the same steps, but we do it differently. It’s what happens when you do something for 20 years.

“At the core, it’s pretty much the same,” Darlington noted. “At the heart of it, I think the music drives that.”