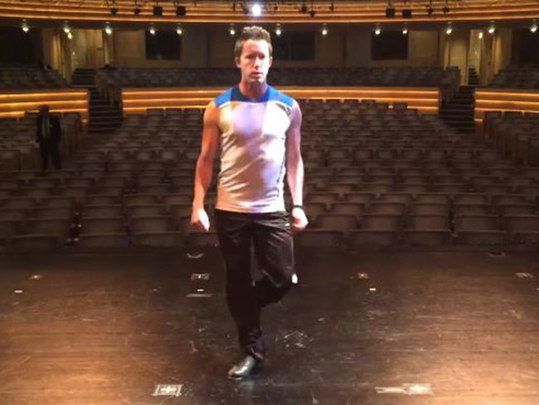 “Riverdance” performer James Greenan’s montage of male Irish dancers went viral when he released it in 2014 and it’s easy to see why.

As Greenan describes it: “the men of Irish dance showing the world what it’s all about…skill, power, and masculinity.”

Greenan, then a principal dancer in “Riverdance,” created a video montage with the goal of breaking stereotypes about Irish dancing – particularly that it’s “just for girls” and doesn’t require as much skill and competitiveness as other athletic forms.

He told IrishCentral that the video, which features dancers from Ireland to Boston to Bulgaria, “expresses the skill and agility needed to compete in this sport.”

He said the idea came about when he and a few of his friends from the Irish dance world began posting videos online showing their new moves or innovative rhythms. From this, he was inspired to create the first “online jam session,” or #LADjam as it has been hash-tagged.

“I posted a clip of myself dancing 16 bars of rhythm as a demonstration and I wrote a caption on it to encourage the men of Irish dance to come together and create the first online jam session. They were required to showcase their best footwork in the same amount of bars (length) and at the same speed as I had demonstrated.” He then compiled the videos into the first #LADjam, after which the project really took off.

“The word spread like wildfire and everyone wanted to be a part of it including parents, teachers and kids as young as nine from many continents. They danced in the street, in their kitchens, on stages, in their living rooms, in corridors and in studios. It was a platform for guys to showcase their talents on a larger scale instead of participating in a strict competition environment.”

Delighted that the video has already gone viral he said he hopes it will “show the world that Irish dancing is a sport and it should be considered as athletic and demanding as any other Olympic sport. It also shows how the Irish culture has spread worldwide.”

The video is part of a collection call #LADjam. Greenan plans to make another montage featuring the top 20 clips.

“Hopefully the #LADjam will change people’s perceptions, give Irish dancing the rightful credit it deserves on par with other Olympic sports, and encourage generations of young men to stick at it keeping the culture alive,” he said.