A round-up of GAA news from Ireland, including Brian Cody quits as Kilkenny hurling boss, and Declan Bonner departs Donegal. 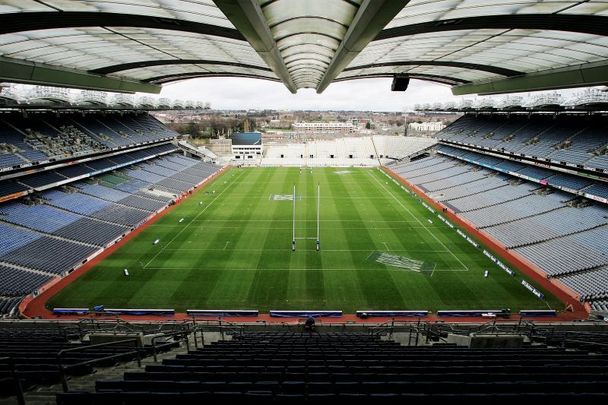 The home of the GAA, Croke Park in Dublin. Getty

Galway boss Padraic Joyce was not a happy man as he addressed the media in the aftermath of Sunday’s All-Ireland football final loss to Kerry, referee Sean Hurson the focus of his ire as he reflected on one crucial decision at Croke Park.

The sides were level on 16 points apiece when Galway’s John Daly was tackled by Kerry’s Killian Spillane and Hurson awarded the free to the Kingdom. David Clifford scored it and Kerry added the late scores to secure a four point victory.

For Joyce, that decision was pivotal on a day when his men gave their all and handed the favorites the fright of their Championship summer for three-quarters of an intriguing final.

“To me, the most important and crucial part of the game is how they got a free when the game was 16 points apiece. I couldn’t get over it,” said Joyce.

“From where I was standing, it looked to be like Damien Comer was pushed in the back and it should have been a free out and then he gave a free against John Daly for apparently holding his hand.

“John Daly had the ball in his hand, trying to get out. The reason his hand was up high was to stop the Kerry fella’s hand from going around his neck, which is what happened. Can’t get over it. Those frees are like tap-overs for the likes of Clifford. It was a two-point swing for us. We had the momentum at that stage.”

All that said, Joyce was incredibly proud of his players as their first All-Ireland final appearance since 2001 came agonizingly close to the ultimate prize.

“I said to the players, to a man, I am really proud of them from where we have come from, where we were to where we are now as a group,” he added.

“The dressing room in there is really hurting and I know everyone in the room, nobody gave us a chance in the match. But look it, we knew we had a great chance and we are bitterly disappointed that we had come so close.

“I thought we played very, very well. Played football to try and win the game. Credit has to go to our defense. Liam Silke was outstanding at center back, kept Sean O’Shea very quiet. Jack Glynn was immense on Paudie Clifford.

“We had a foothold in the game. I know we lost a few kick-outs and stuff, but we fought our way into the game. They have the spirit back, bit of proudness again in Galway. Brilliant support, probably out-numbered Kerry 2-1.”

And like everyone else who witnessed this titanic struggle, star man Shane Walsh and midfielder Cillian McDaid caught Joyce’s eye.

“Shane was exceptional, in fairness to him. He kicked nine points, left foot and right foot. We probably should have got a little bit more ball to him towards the end of the game, but he was exceptional,” continued Joyce.

“I know he was questioned about not scoring from play the last couple of games, but he played to a system and a game plan that we had. Today he did the same thing, but we played him higher up top today and he did untold damage up there. He was really, really good.

“Cillian was exceptional on the attacking side, he kicked three or four scores, kicked one or two wide as well. But he was exceptional, fought for everything. Put his body on the line and had an exceptional year, has been injury free all year.

“Look it, lads to be honest, I can’t fault our players out there. To a man, they were exceptional. It was a bitter lesson for us. We are very disappointed. There is nobody in that dressing room happy we lost by a few points. We came up to win the Sam Maguire and we didn’t. We are just gutted.”

Now Galway must build on the momentum of 2022 as they bid to get their hands on the All-Ireland again after this near miss.

“The county needs to use this as a springboard. There is a lot of good, ambitious young players in the group. And even our older players aren’t that old. We need to use it to come back stronger and see what departments we can get better in,” said Joyce.

“Since the 8th of December last year, I started training these fellas and I can’t fault them for any bit of effort. They trained when they were supposed to train and played when they are supposed to play. They just fell short at the end of the day and it is a huge lesson for us but we are using it as a springboard to create something special going forward.

“To a man, they are a credit to their families and their clubs and I couldn’t speak highly enough of them, they are a great bunch.”

The build-up to Sunday’s All-Ireland football final was dominated by the biggest story in hurling in years – Brian Cody quit as the game’s most successful manager ever on Saturday afternoon, his departure confirmed in a very brief but glowing statement from the Kilkenny County Board.

The decision was announced just six days after the All-Ireland final defeat to Limerick and brought the curtain down on a 24-season career as boss for Cody who won an incredible 11 All-Ireland titles for the Cats in that time along with 18 Leinster Championships and 10 National Leagues.

As expected there was no comment from Cody, affirmation coming only via the County Board’s press release. It said, “On behalf of Kilkenny people everywhere, Kilkenny County Board extends sincere gratitude to Brian for his lifetime of contribution to the county and the commitment and passion he brought as a player and as manager, working tirelessly with a single aim, to do what was best for Kilkenny hurling.

“The board would also like to acknowledge the bond Brian helped create between team management, players, County Board, clubs and supporters clubs as all worked seamlessly together in preparing our teams while organizing and promoting our games.

“We are aware of the huge debt we owe Brian for the wonderful successes and occasions we have enjoyed as we watched the teams he created play and succeed. Wherever and whenever our games are discussed in the future, Brian Cody’s achievements will be the benchmark managers will be measured by. We wish Brian all the best in the future.”

Speculation has current Galway boss and Kilkenny legend Henry Shefflin as favorite to replace Cody, with the new manager certain to come from within the county according to Cody’s former player and eight time All-Ireland winner Aidan Fogarty.

“First of all, Kilkenny won't go outside the county. They’ll pick someone inside the county,” Fogarty told RTE Sport. “There’s plenty of players that have won enough, that know enough about the hurling game to go in as manager.

“In terms of Henry Shefflin, I’d love to see him train Kilkenny. He’s only given one year in Galway, would he leave so soon? I suppose we saw Liam Cahill going to Tipperary with Colm Bonnar only getting a year. It totally depends.”

Brian Hogan, All-Ireland winning captain in 2011, told RTE what Cody brought to the table inside that Kilkenny dressing room.

“He’d make you feel seven foot tall. He’d really make you believe you could go through a wall or take on anyone,” said Hogan.

“As a team, he’d make you believe that once you got your own game right, and it was very much internal focus on yourself, getting yourselves right, be prepared, that everything else would look after itself from there.

“He was a bit of a psychologist maybe. I know the current Limerick team have Caroline Currid there and Brian in some respects was like that. A tough taskmaster as well. Many managers have a crop of players and they get success and they get as much out of them as they can and then they come to an end.

“For Brian to continuously keep that kind of drive himself, that passion, and then obviously to evolve things. Hurling has changed, the fundamentals have always stayed the same and that is something Brian would very much drive home with the current group.”

Declan Bonner has confirmed his departure from the Donegal football team manager’s role with Jim McGuinness the early favorite to succeed him in the role.

“I am stepping down with immediate effect from my role as Donegal senior football manager,” Bonner said last week.

“It has been a great honor to manage this team over the past five years, as it was to manage the teams from under-16 level up in the five years before that.

“Highlights from my time in the role include competing in four Ulster finals and winning two of these, back to back, in 2018 and 2019. I am proud to leave the team playing league football in Allianz League Division One next year.”