David Clifford was Kerry's top-scorer during their victorious match against Galway for the All-Ireland Senior Football Championship final on July 24. 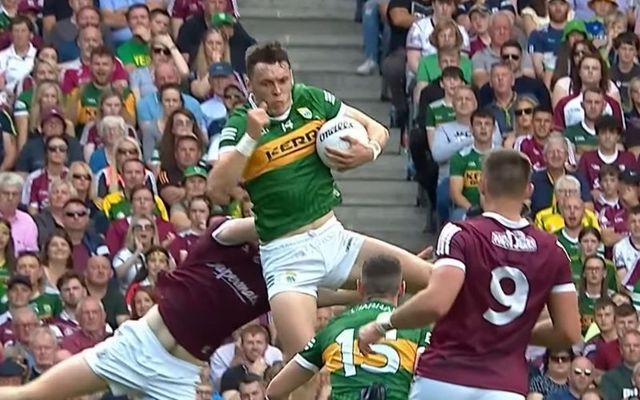 Kerry beat Galway 0-20 to 0-16 in Croke Park on Sunday, July 24 to win their 38th All Ireland Senior Football Championship.

Sam Maguire was back in familiar haunts on Monday – a quick visit to Temple Street Hospital followed by a bus journey home to Killarney and Tralee that included a pit stop at the HQ of the Kerry team sponsors, naturally enough the Kerry Group just outside Naas, as the Kingdom celebrated a first All-Ireland title win in eight years.

What a turnout in Tralee!!😍 Thank you to our wonderful supporters in Tralee and beyond for coming out to welcome our Champions home!!💚💛 https://t.co/EDXeR4WMqO

It was a journey well known to the brightest silverware in Gaelic football, a journey earned by the brilliant David Clifford and co. as they finally overcame Galway by 0-20 to 0-16 in an All-Ireland final that was earlier than ever in the calendar year but more than a match for any classic that came before it.

Like the hurling decider a week earlier, this was an end to the football Championship season that did the occasion proud. Galway, inspired by the phenomenal Shane Walsh, went toe to toe with the most decorated side in Gaelic football history and put it up to the Kingdom – there would be no easy titles won in Croke Park last Sunday and there weren’t.

It wasn’t until the final 17 minutes that Kerry finally stamped their authority and their class on this exchange as they outscored Galway by eight points to two in that period to complete a fourth All-Ireland victory in total for manager Jack O’Connor. Incredibly, O’Connor has now won Sam in the first year of each of his three stints as Kerry boss.

Clifford won The Sunday Game man of the match award thanks to his eight point total, three of them from play, but for many it was Walsh who stole the show, his nine points keeping the west awake until the strength of the Kerry bench and their physical conditioning took over when it really mattered.

The scoring duel between Clifford and Walsh was everything it promised to be, while Galway midfielder Cillian McDaid was magnificent in the opening period as they scraped a narrow 0-8 to 0-7 interval lead in their first final appearance since 2001.

That Kerry kicked seven wides in that half explained the worried look on O’Connor’s face as he went down the tunnel, but his actions in that dressing room were decisive as he withdrew David Moran and Paul Geaney for the Spillanes, Killian and Adrian, and the transformation was underway.

Kerry finally took the lead on 41 minutes after quick points from Clifford and his brother Paudie, and though Galway were level again with five minutes remaining, the Munster champions turned the screw with points from Clifford, from a hotly disputed free, Killian Spillane, Gavin White and Seanie O’Shea.

To be fair, the win was no more than Kerry deserved for that late show of resilience and character. It was certainly no less than Clifford deserved as all the long nights training and dreaming of All-Ireland glory finally came to fruition.

“It is very obvious this is something I dreamt about all my life,” a delighted Clifford told the waiting media afterward.

“In January and February every year we felt like we were going to go and win the All-Ireland. I’d say this year was probably the first year that we didn’t mention winning the All-Ireland – until today, really.

“I think that was important for us. Maybe we were building it up too much in other years, I don’t know. As I say, it’s easy to say you’re going to win it in January and February. Then you actually have to go and do it. It’s class.

“You see so many sportspeople who have never won whatever – Premier League, All-Irelands, whatever. There’s absolutely nothing inevitable about it. It’s tough to take the losses each year but it makes this so much sweeter.”

The Kingdom’s top scorer on the day reflected on some long nights, with Kerry legend Maurice Fitzgerald working on his free-taking technique as he analyzed his man of the match performance and the critical free that finally put Kerry ahead for the first time.

“I missed a few frees at the start in the Cork game in 2020 and I did a lot of work with Maurice Fitz last year on it, trying to get into the right headspace and not be too causal standing over it. So I was quite confident and went back to my routine and thankfully it went over,” added Clifford.

That point convinced Kerry they could win this game. So did a halftime rollicking from manager O’Connor who Clifford admitted afterwards had made a difference. He said, “It was a general disappointment at halftime, not about anything we brought – we just weren’t ourselves. We didn’t nail our shots. We didn’t bring any sense of want or need out there.

“There was no intensity from us. So I think it was disappointment, really because we knew there was so much more in us. You have those days some times, but thankfully it came right for us.

“I was just saying it to a few lads there, it felt like they had really, really analyzed us very well individually. In the game, a few things happened that you were going, ‘Jesus, that usually works for me.’ So fair play to them – they had massive analysis done and they delivered on their game plan.”

For manager O’Connor, his county’s 38th All-Ireland title was all about the players and the commitment they made to edge Galway out.

“Look, it isn’t about myself, it’s about that group of lads. We’ve been trying to put them together since 2014. I finished up with the seniors in 2012, because we knew that a new group needed to come. The great team from ‘04-‘09 had come to an end here 11 years ago, I suppose Stephen Cluxton put an end to them,” he said.

“We knew that a new group had to be developed and whatever. That began in 2014. We didn’t think today would take eight years to go the distance, but with that group, I know we won one in ’14 but this is the five in a row minors really coming through today. We’re just hoping it is the start of something good.”

As for Clifford, his manager shared the national sense of wonderment as the full-forward’s contribution on the day.

“I went down there to the corner under Hill 16 at the angle where David Clifford kicked that last free and I will tell you something that is some kick, that is some kick. There was a tricky wind going in there and he did not have much to aim at and he stuck it over so hats off to him,” said O’Connor.

“Look, he is a remarkable man and that weight of expectation has been on him since he was 18 and he has jumped every hurdle he has come across. He jumped another big one today. We felt it was a free, we felt he leaned in with the shoulder. It was a great conversion; I am telling you it was a tricky free and I think it was the one that gave us a small bit of daylight.

“This was never going to be an easy game. We never took Galway lightly. I thought Galway played very, very well. Maybe the tag of favoritism rested heavily on our fellas’ shoulders. particularly in the first half I thought we were very jiggy and not composed on the ball.

“I was quite animated myself at halftime. I felt that we weren’t playing to our potential out there. There were players who had more to give. We’ve always been pretty composed in the dressing room at halftime. But I think today was one where we needed a bit of a jolt. And we left a couple of yahoos alright.”

Royal County legend Colm O’Rourke has finally agreed to take on the role of Meath senior football team manager with Barry Callaghan and Stephen Bray as his selectors . . .

Work commitments have forced Billy O’Loughlin to quit his post as manager of the Longford footballers after just one season in charge . . .

James McCartan has brought an end to his second term in charge of the Down senior footballers . . .

*This roundup first appeared in the July 27 edition of the weekly Irish Voice newspaper, sister publication to IrishCentral.