Radio Kerry presenters could not contain their excitement when Sean O'Shea landed a magnificent point to secure Kerry's victory over Dublin in the All-Ireland Senior Football Championship semi-final. 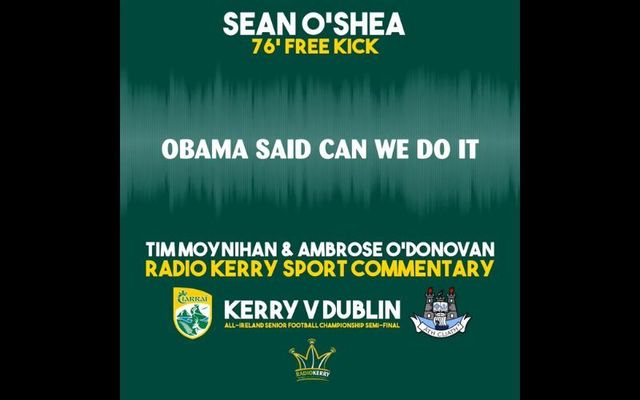 With the score level at 1-13 in stoppage time, and just seconds to go before the final whistle blew, Kerry’s Sean O’Shea landed a magnificent point from a free kick at 55 meters while facing directly into the faces of Dublin supporters on Croke Park's Hill 16.

Seán O'Shea sends @Kerry_Official through to the All-Ireland final thanks to a last-gasp free. pic.twitter.com/0zcuRKtmaU

O'Shea, who plays for Kerry SFC club Kenmare Shamrocks, helped secure Kerry's first championship win over Dublin since 2009. Now, for the first time in three years, Kerry is into the All-Ireland Senior Football Championship final where they'll battle Galway on July 24 in Croke Park for the Sam Maguire Cup.

Needless to say, Kerry fans were ecstatic on Sunday, including, of course, Radio Kerry presenters Tim Moynihan and Ambrose O’Donovan who were covering the match live.

The duo’s exuberant commentary of O'Shea's game-winning kick has gone viral this week for capturing the absolute thrill of the victory for Kerry supporters.

“Seanie will have to do to Dublin what Stephen Cluxton did to us in the All-Ireland...

“Can Seanie quieten the hill?

“It’s hard to quieten the hill, says he.

“Now, Seanie O’Shea, studying, steadying himself, on the run up, strikes the ball, hits it with all his heart, where does it go …

“It’s over the bar! The kick is over!

“Kerry, Kerry are in an All-Ireland final!

“Ambrose, we did it! Up Kenmare! We’re in an All-Ireland Final, Ambrose!

“The answer to ‘Could Seanie Shea do what Stephen Cluxton did’ and the answer is, yes, yes he can! Yes, we can!

You can listen to O'Donovan and Moynihan's commentary here: