GAA Roundup: Kerry and Galway to face off in GAA All-Ireland final

Kerry and Galway will face off in the GAA 2022 All-Ireland Senior Football Championship final on July 24 after winning their semi-final matches in Dublin's Croke Park last weekend. 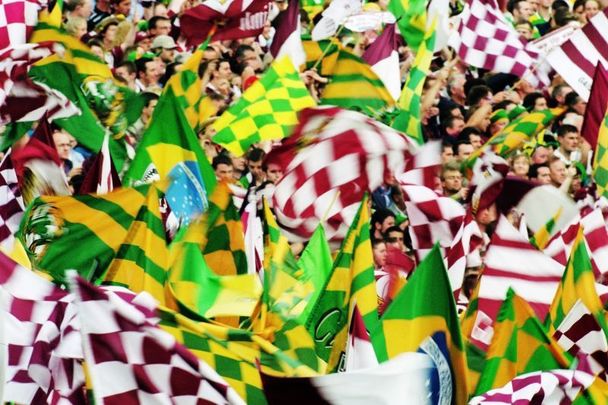 Some pundits called it the greatest point ever scored from a Croke Park free. For Kerry fans, it was the huge 50-yard effort from Sean O’Shea that opened the All-Ireland senior football final doors to a Kingdom. For the Hill 16 diehards it was a taste of how Kerry must have felt when Dublin ‘keeper Stephen Cluxton won Sam Maguire with the final kick of the 2011 decider.

However you looked at it, O’Shea’s last gasp free, when extra time seemed inevitable and a penalty shoot-out seemed possible, was the icing on the cake that was an incredible All-Ireland SFC semifinal between two of the great heavyweights of Gaelic football. They didn’t disappoint as Kerry just about emerged to play Galway in the final game of the football summer on Sunday, July 24.

A day after Galway had ripped Derry apart in the opening game of a weekend festival of football, it was Kerry’s turn to provide the headlines but these were so much more dramatic after a game that had a little bit of everything. Dessie Farrell’s Dublin grabbed the opening point of the game through Lee Gannon, but that was the only occasion on which they led proceedings.

By the end of a sensational opening half they were 1-8 to 0-6 down, largely due to the sheer brilliance of O’Shea and David Clifford who scored 1-10 of their total between them. O’Shea hinted at the glory to come with a fourth minute goal that served notice of Kerry’s intent and not even his penalty miss, after keeper Even Comerford went the right way after a long period of treatment, could dampen the Kingdom’s intentions.

The Dubs started without the injured Con O’Callaghan but James McCarthy and Ciaran Kilkenny took on the leadership mantle upfront in a frantic second half. A Cormac Costello goal on 45 minutes and points from Kilkenny (two) and McCarthy had the Blues level by the 69th minute – and the referee signaled for five added minutes.

The sides exchanged points before the enigmatic Clifford drew the free with just seconds left on the clock and O’Shea did the rest to book Kerry a place in the All-Ireland decider and a first Championship win over the Dubs in 13 years.

For Kingdom boss Jack O’Connor, a man who knows how to win Sam, it was a special day as his side finally stood up to be counted on the big stage with O’Shea the greatest hero of them all. “I didn’t think it was kickable to be honest with you, straight up,” O’Connor told Sky Sports.

“I didn’t think a man could get the distance because Seanie Shea had emptied the tank. That was the 76th minute. He had given a ferocious performance up to then. To have the resilience and the strength and more importantly, the technique to kick that with the in-step and just glide it in from the right-hand past, into the breeze and into the Hill.

“So that has to be one of the best pressure kicks we’ve seen here (Croke Park), and we’ve seen a lot of kicks. It was like that all day, the resilience our fellas showed, all the momentum was going towards Dublin, and there was a strong wind out there. Our fellas just found a way and that’s the way it’s been all year.”

For man of the match Paudie Clifford, all the credit went to O’Shea at a time when Kerry looked like losing their grip on the game and an All-Ireland final chance they have been waiting on since 2014 and the win over Donegal.

“It was a roller-coaster, I thought we had given it away a few times but what a kick at the end, unbelievable,” said Clifford. “You just have to put them away when you have a chance and that showed. We were lucky to come away in the end but we were worried.”

For Farrell and several of his remaining senior players, it is now a question of what’s next after this gargantuan effort just came up short. Farrell’s three year agreement as manager is now at an end, while some of his more senior players may consider joining last winter’s crop of retirees. On Sunday, however, Farrell was just proud of his players and their efforts against Kerry.

“We were in a sticky situation at halftime,” Farrell said. “Come out and then Kerry got the next score and we were six down, but I’m tremendously proud of the effort. As we know from down through the years, there are some warriors in that dressing room, but the group has changed dramatically over the last couple of years.

“All the new young players that we’ve brought in have bought in. So many of them wore their heart on their sleeve today, and that’s all you can ask for. Hats off to Kerry. They’re a great team, a coming team, and deserved their victory on the day.”

Galway Too Good for Derry

Two-goal Damien Comer was the hero with the killer second-half goal from 40 yards out into an empty net as Galway punished Derry dearly for pushing forward to try and salvage Saturday’s All-Ireland SFC semifinal, a goal that guaranteed a 2-8 to 1-6 win for the westerners and a return to the All-Ireland final for the first time since 2001.

The Ulstermen were six points down when ‘keeper Odhran Lynch went forward again but Galway gained possession, Liam Silke delivered a long ball for Comer to send to the net from distance and ensure the ink on the writing already on the Croke Park wall for Derry could dry.

The 64th minute finish was clinical. “It was euphoria I suppose. Getting back and sticking to the game plan is what got us here,” Comer said.

“ You just have to be patient and stick to the game plan. Opportunities will arise and you have to make your own bit of luck and try to be patient but at the same time go searching for ball. Thankfully we came out on the right side of it and I’m just happy at the end of the day.”

Having spent as much time on the treatment table as on the training ground and the pitch in recent years, Comer was happy to hog the limelight on Saturday.

“It’s special. I’ve had a rodeo ride with injuries through the years so it’s a big one for me personally and my family as well,” he said.

Galway last lifted Sam in 2001 and Comer, only seven back then, added, “I was here. I’ve vague memories of it. I remember the celebrations more than the game. It’s a while ago now.”

That All-Ireland dream is all that mattered all season for Galway boss Padraic Joyce, Man of the Match in that 2001 win.

“I’d said from day one since I got the job, it’s about winning an All-Ireland,” Joyce said. “It’s taken us three years to get here but look it, we’re here now so we’re definitely going to make the most of it.

“Ye lads know from writing about us, there’d be a soft belly that people see in Galway. And until we actually go and win these big games in Croke Park, that tag is going to follow you around. So after winning that game against Armagh and the way we won it, being six up, letting them back into it, and the row, normally gone by we might have folded a bit, but we took a lot of solace from that.

“There is a sign in the dressing room going out the door saying ‘find a way.’ You have to find a way, whatever goes on.

Derry boss Rory Gallagher was respectful in his post-match analysis. “I think we were beaten by a better team, there’s no doubt about that,” Gallagher told RTE Sport. “I think the way the game panned out we were very good and controlled an awful lot in the first 18 or 20 minutes or whatever it was.

“We would have liked to have been ahead more than we were and were disappointed to be level at halftime, albeit Galway had turned the direction of the game and were starting to get the measure of us. But disappointed that we left chances behind us under not that much pressure but also with the amount of ball we had in the first half that we didn’t put more of a score.

“We settled really well without our main players playing close to the level they had. Galway set out their stall in what way they were going to play when we got the ball, we kind of pre-empted that they wouldn’t mark a number of our players.”

Gallagher knows Derry will learn from the experience. “We don’t have an awful lot of experience playing at county level at Croke Park on days like this, but there’s a lot of learning to do,” he said.

“If you look at the League game we learned massively, but the problem was we didn’t put the scores up when we did have control of the ball. It’s been an unbelievable year, it’s very disappointing we didn’t get to an All-Ireland final. We don’t look at it like where we’ve come from or anything like that. We have an awful lot of quality.”