The Galway and Armagh quarter-final match of the GAA's All-Ireland Football Championship descended into an unsavory brawl at Dublin's Croke Park on Sunday. 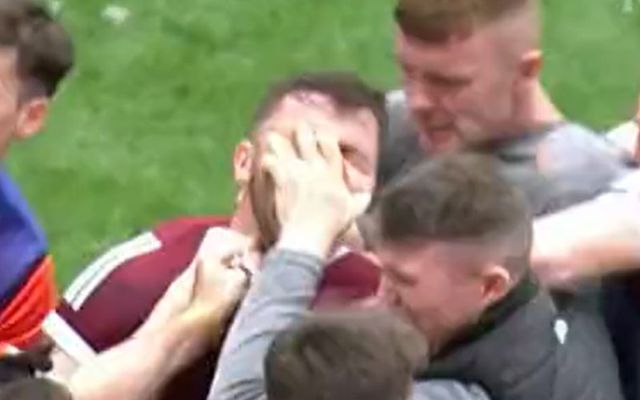 Galway and Armagh players became involved in a pitch-side brawl at the end of normal time of Sunday's thrilling All Ireland quarter-final at Croke Park. The Sunday Game ,Twitter

The all-out brawl between Galway and Armagh footballers after the full-time whistle of Sunday's GAA All Ireland Football Championship quarter-final in Dublin's Croke Park has been met with widespread condemnation.

Dozens of players from both Galway and Armagh were involved in the ugly pitch-side brawl on Sunday as they headed for the dressing rooms to prepare for extra time.

One particularly unsavory incident saw a non-starting member of the Armagh panel appear to eye gouge Galway forward Damien Comer while he grappled with another Armagh player.

The brawl lasted several minutes and marred what had been a thrilling encounter.

Violent scenes then erupt as the full-time whistle goes, including an apparent eye gouge, as the teams head for the tunnel. pic.twitter.com/KO6qbjHdRC

Speaking outside Dublin Castle on Monday, Taoiseach Micheál Martin condemned the brawl, describing it as "shocking to see".

"It was a great game of football and it's awful that it was marred by what transpired at the end of the game," Martin said.

"There is no room for that in any sport, particularly when young people are watching their heroes. They don't need to see this. It was quite disturbing to see, and quite concerning."

"There are families going to these games," she said. "I know of a five-year-old who was at that match yesterday, a first-time experience. They should have come home remembering the amazing, edge-of-the-seat stuff that it was. Instead, they see sports players behaving like that. It's despicable.

"These players need to be mindful that they are role models for young people. There is no place for violence in sport."

"People talk about unsavory. It’s not, it’s disgusting. We just don’t want to see it, simple as that. There are a load of cliches that we could roll out," McConville said on Sunday.

Fellow RTÉ pundit Pat Spillane said the incident "destroyed" what had been a "great game of football".