GAA footballer Denis 'Dinny' Brennan has drawn a hilarious reaction after he was filmed taking a phone call while on the pitch during a recent match. 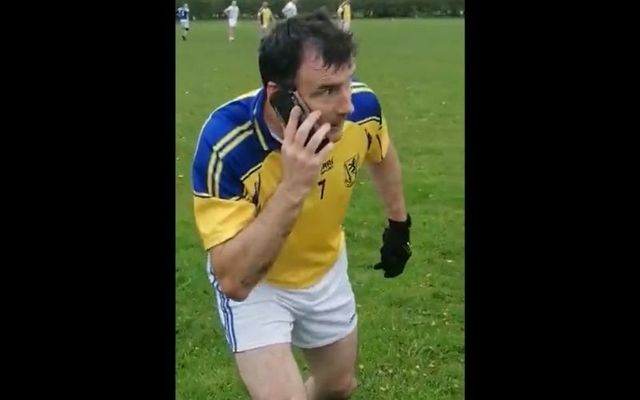 Denis 'Dinny' Brennan, a talented GAA football player from County Laois, is going viral after he was filmed taking a phone call while on the pitch during a recent Gaelic Masters match.

“Ladies and gentleman, the one, the only, the great Dinny Brennan. #OneOfOurOwn.”

Old school no handsfree making a phonecall during a match. Wouldn't see it now with young lads using airpods. #gaa

Brennan, who was on the U21 Laois panel that won the Leinster Championship in 1994, now lines out with the Laois Masters, a GAA football team that is open to all current and former players who are 40 years old as of the year of competition.

Brennan told Independent.ie that he was on a work call during the May 2 Gaelic Masters match against Kildare Masters.

"The call was from a customer in England whose machine had broken down," Brennan said. "I was on call and had to answer him.

He added: "He didn’t what was going on; just kept talking about the machine... I could have been getting chased by a mountain lion and he wouldn't have cared."

While Brennan has now shed light on the ever-important phone call, there were plenty of hilarious Irish theories and reactions to the video:

"Probable bidding on a few cows in a phone in auction"

"I am absolutely shocked at this video! A man, multitasking!!!  had this video been verified?"

"He must be gettin' the low down on local Spar deals for dinner on the way home! 2 for wan Jambons"

Back in 2020, Brennan shared this heartfelt recollection about what his club Park Ratheniska GAA means to him: