An estimated 1,000 people gathered in Dublin's Croke Park to mark the Muslim holiday of Eid al-Adha on Saturday, July 9. 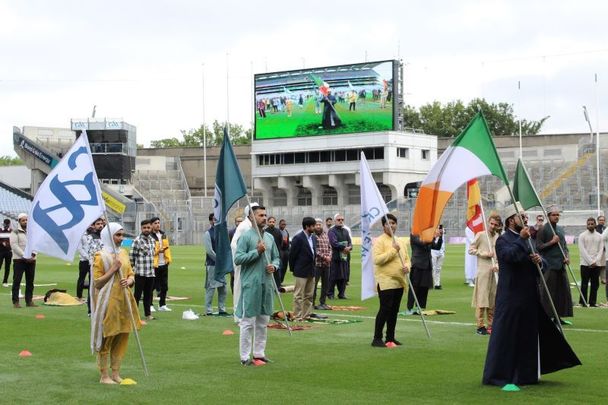 Dublin's Croke Park, the headquarters for the Gaelic Athletic Association (GAA), hosted celebrations for Eid al-Adha on July 9 for the third year in a row. Irish Muslim Council @IrishMuslimCoun, Twitter

Dublin’s Croke Park played host to the Muslim celebration of Eid al-Adha this past Saturday, July 9, for the third year in a row.

An estimated 1,000 people, young and old, were in attendance at Dublin's Croke Park, the headquarters for the Gaelic Athletic Association (GAA), on Saturday, making the event the biggest of its kind so far.

The hosting of Eid al-Adha in Croke Park began in 2020 to facilitate social distancing at the height of the pandemic, and the event has steadily grown since.

"Three in a row. It seems Dublin’s Muslims are as lucky as Dublin’s footballers," Shaykh Dr. Umar Al-Qadri, the chairperson of the Irish Muslim Council, said during his sermon after leading the traditional prayers on Saturday.

Thank you to everyone who joined us in the spirit of togetherness, love and friendship to celebrate #EidAlAdha at Croke Park on Saturday, and all who worked so hard to make it possible. Go raibh míle maith agaibh go léir. pic.twitter.com/sYbI6XRlx6

Al-Qadri continued: “What began as a necessity, something born out of the pandemic and public health restrictions has now become tradition, has now become a celebration, an annual message from Ireland to the whole world that in this small corner of Europe, at least, we remain together despite our differences.

"We remain united despite our complicated and differing layers of identity and that we choose hope not hate.

“And in doing so, we prove to the world that hatred and division are not inevitable. They are not human nature; they are not how societies have to be.

"Events such as these are a model of living hope, not only here in Ireland, but also a message of hope for more troubled parts of the world that they too can, and indeed should, hope for a better society, for reconciliation, for an end to division and hatred.

“But hope cannot be taken for granted, it is something that must be worked for, won against the odds, wrested from the powerful hands of those with a vested interest in the status quo.”

Speaking after Al-Qadri, Larry McCarthy, the President of the GAA, said: "You're here for your third-in-a-row, and I suspect that there's no reason why you mightn't come for four or five more in a row, rather like the Dubs.

"The GAA has always been about people and the communities that our clubs serve in Ireland and around the world. We are committed to the manifesto Where We All Belong.

"And I'm delighted that so many of our clubs give meaning to that ideal through inclusion and through welcome that they give to people playing and enjoying our games. Occasions, such as this, strengthen those links undoubtedly.

"It is, in that spirit of friendship that we are delighted to welcome you, Dr. Qadri, and your congregation to Croke Park and extend our very best wishes as you mark this important day for your community."

Several Irish politicians were also on hand for the events at the start of a busy weekend in Croke Park. Saturday's event was hosted just hours before the Tailteann Cup final match between Cavan and Westmeath, which was followed by the All-Ireland Senior Football Championship semi-final showdown between Derry and Galway.

TD Jack Chambers, Ireland's Minister for Sport, noted how "the power of sport to bring communities and people from all backgrounds together is enormous."

The power of sport to bring communities & people from all backgrounds together is enormous.

Privileged to attend and speak at the #EidAlAdha celebrations in Croke Park again this year.

TD Mary Lou McDonald, the president of Sinn Féin, said it was a "wonderful celebration of family and friendship."

A wonderful celebration of family and friendship. Today in Croke Park we imagine our shared future together in a new Ireland. #EidMubarak @IrishMuslimCoun @officialgaa pic.twitter.com/vRjg0VohMK

GRMA @DrUmarAlQadri , Yusef and all at the @IrishMuslimCoun for such a wonderful morning to celebrate. Eid Mubarak to all my Muslim friends. #dubw @sinnfeinireland pic.twitter.com/dZd8FiJqFe

Green Party TD Neasa Hourigan thanked the Irish Muslim Council for the invite, and for "creating such a lively atmosphere of family and inclusion."

Labour Senator Marie Sherlock said it was a "privilege to be asked to speak" at the event.

Wonderful to join Hajra and @IrishMuslimCoun as part of Eid celebrations in @CrokePark today.

A privilege to be asked to speak.

The promise of our Republic is that regardless of colour, creed or country of birth, that those making a life here must be equal. #EidMubarak pic.twitter.com/346GNtAaAG

Had a lovely morning with my friends from the Muslim Council at their celebration of Eid Al Adha in Croke Park.A delightful cross community, event full of inclusivity and respect.@DrUmarAlQadri pic.twitter.com/wzV7tB0mEB