The Irish Muslim Peace & Integration Council (IMPIC) says that the preaching of homophobia should have no place in our society after the murders and assault in Co Sligo this week. 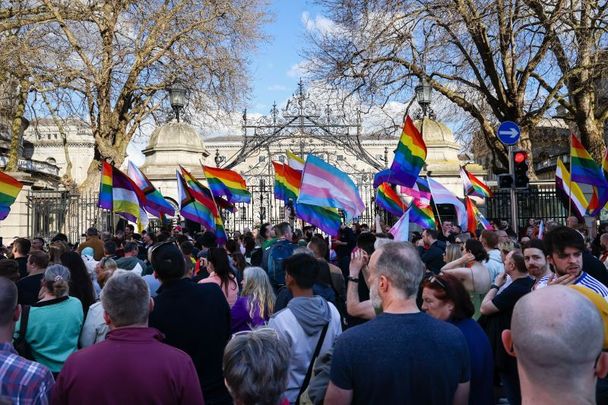 April 15, 2022: Vigil outside Leinster House in Dublin after the murders of Aidan Moffitt and Michael Snee in Co Sligo earlier this week. Shaykh Dr. Umar Al-Qadri, the founder and chairperson of IMPIC, spoke at the vigil. RollingNews.ie

The Irish Muslim Peace & Integration Council (IMPIC), a leading Muslim group in Ireland, is offering solidarity and denouncing homophobia after the murders and assault that occurred in Co Sligo in recent days.

IMPIC issued a statement on Thursday expressing its "shock and sadness" at the "senseless" murders of Michael Snee and Aidan Moffitt that occurred separately in Co Sligo earlier this week.

The statement was issued the same day that Yousef Palani, 22, was charged with the murders of Aidan Moffitt and Michael Snee, as well as the assault of Anthony Burke, all of which occurred in Co Sligo in recent days. Palani has been remanded into custody and is due to appear in court again later this month. Gardaí said on Wednesday that they were "actively investigating as to whether there is any hate-related motive" in the murders.

In its statement on Thursday, IMPIC offered its "thoughts, prayers, and solidarity" to the families and friends of Moffitt and Snee, as well as the wider LGBTQI+ community. It also sent its best wishes to Burke.

The IMPIC statement says: “Forty years on from the murder of Declan Flynn being the catalyst for Dublin Pride, they [the attacks] bring back memories of dark days we thought we had left behind, in Ireland at least. They serve as a reminder that we have much to do at home and around the world to tackle the dehumanisation of LGBTQI+ people.

“It would be unhelpful to try to conceal the fact that an apparently Muslim man has been charged with these crimes. Whilst unable to comment further on the specifics of a case before the courts, we are all too aware that homophobia remains too common in certain Islamic Centres and schools of thought throughout the Muslim world and here in Ireland.

“IMPIC has called on countless occasions for government and state agencies to take the threat of so-called ‘non-violent extremism’ seriously. Tragic events like these show that the preaching of homophobia, misogyny, and otherisation can have unthinkable consequences. There should be no place for it in our society. The government must expedite the process of bringing robust Hate Crime legislation before the Oireachtas.

“IMPIC and our affiliated Islamic Centres remain safe spaces - our doors will always be open for all worshippers and visitors regardless of who they love. Le grá agus le bród. [With love and pride.]

LGBT Ireland responded to IMPIC's statement, saying in part that it “welcomes the chance to come together with IMPIC to condemn these acts and send a clear message that hate crimes have no place in Ireland.”

"We welcome the chance to come together with IMPIC to condemn these acts and to send a clear message that hate crimes have no place in Ireland."
LGBT Ireland and @IMPIC_ie pic.twitter.com/g6R2WLCz19

Shaykh Dr. Umar Al-Qadri, the founder and chairperson of IMPIC, spoke at the vigil held outside of the Dáil Éireann in Dublin on Friday evening:

“We come here to attest to our togetherness: to tell the world that we will face down the cruel dehumanisation and otherisation of LGBTQI people, together. That we will beat homophobia, together.”

Dr. Umar Al-Qadri said that "we will not allow the far-right to use these events to divide us."

“We will not allow the far-right to use these events to divide us. We know they do not care for LGBTQI rights. They cruelly throw LGBTQI Muslims in the same category as their persecutors, attempt to silence them and their allies within the Muslim community.” — @DrUmarAlQadri pic.twitter.com/4fvdxK0eZL

Friday's vigil at the Dáil is just one of many that have been organized across Ireland today and in the coming days. LGBT Ireland published this list of confirmed vigils on April 15:

The funerals for Aidan Moffitt and Michael Snee will be held on Monday, April 18 in Co Sligo.