Ben Banaghan, from County Tipperary, ran 840 miles from the north of Scotland to the south of England over the course of 19 days in memory of Roscommon native Archie Naughton, 16, who died in July. 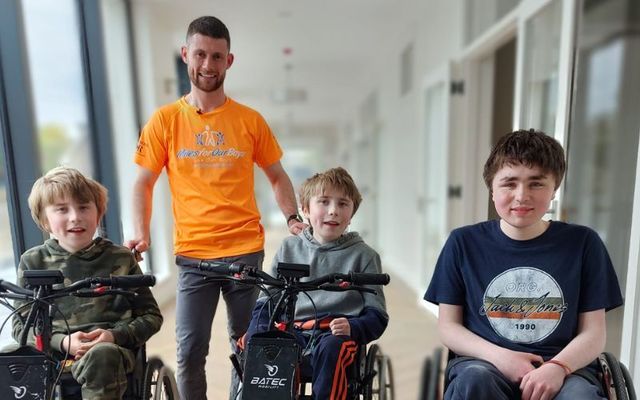 An Irishman has run the length of Britain in memory of an Irish teenager who died in July following a lifelong battle with Duchenne Muscular Dystrophy (DMD).

Ben Banaghan, from County Tipperary, ran 840 miles from the north of Scotland to the south of England over the course of 19 days in memory of Roscommon native Archie Naughton, 16, who died in July.

Archie's twin brothers George and Isaac, 12, also suffer from the genetic disorder, and their parents Paula and Padraic have launched the Join Our Boys Trust to raise money and awareness about the condition.

DMD is a severe and progressive muscle-wasting disease that leads to difficulty with movement and eventually to premature death. The condition occurs primarily in boys and affects roughly one out of every 3,500 newborns.

Padraic and Paula Naughton, who are both nurses, were given the devastating news that all three of their sons suffered from the fatal genetic condition on the same day in November 2012.

Banaghan, who met Archie, George, and Isaac while raising money for DMD, had been already planning to run the length of Britain before Archie's tragic death, while Archie was supposed to join him at the start and the finish of his grueling journey to help push him toward his goals.

He told IrishCentral that he shifted the focus of his run following Archie's death to honor his memory and raise awareness about the condition.

"Even though he wasn't physically there with me, he was still there with me and my team throughout the 19 days," Banaghan told IrishCentral.

Banaghan said the run, which averaged 44 miles per day, fluctuated between good and bad moments.

"It was an extremely difficult challenge but like anything in life, it fluctuated between good and bad moments. As the days went on the bad moments got worse and worse but knowing that these moments would end, my body would eventually recover once I finished, and the reasons and causes I was doing to run for, I knew I would get through it."

He said he received constant support on social media as he attempted the challenge, while a small number of people came out to cheer him in person.

ISG, Banaghan's employers, have agreed to match the amount of money he raises from the campaign, which currently stands just above £40,000 ($44,000).

Paula Naughton paid tribute to Banaghan's inspirational effort, saying that the family was "overwhelmed" by his generosity and his desire to support the Join Our Boys Trust.

"We are so happy that Ben and his family got to meet Archie and spend time with them," Paula told IrishCentral.

"I must confess, as a mother, I was really, really worried about Ben. I need not have worried though as Ben and his magnificent team had every single thing planned and organized."

Paula said her son had completed three assisted Dublin Marathons and added that he was hugely excited about joining Banaghan on his run through the UK.

"Archie and I had arranged to meet the Team in Scotland and then in Lands End, but sadly that was not to be," she said.

Paula told IrishCentral that the family has been left heartbroken by Archie's death but said it has inspired herself and her husband to keep going with their fundraising efforts to honor Archie's life and legacy.

"As Archie was dying, his only wish was for us to keep going and get a treatment for his brothers.

"George and Isaac miss Archie terribly. He was their big brother and greatest advocate. Archie was due to start his leaving cert this year and had chosen politics as one of his subjects. He had big plans to change the World.

"I think losing a sibling is challenging for any child, but when you have the same disease it must be utterly terrifying."

One of the aims of the Join Our Boys Trust, which has raised more than €270,000 of its €500,000 goal since it was established in 2014, was to build a purpose-built house for the three brothers. Paula told IrishCentral that the Naughton family is now living in the house, although some issues, such as landscaping and an access road, still need to be completed.

Paula said the family was supposed to move into the house in June, but Archie's deteriorating health forced them to abandon the plan.

"It is a huge sadness to us that despite all the fundraising he did himself, he never got to live in it. We are hoping that with support we can make a beautiful accessible space outside for George and Isaac to enjoy with their friends for the time they have left."

The Naughton family has decided against owning the house and will only borrow it to use as long as the boys need it.

Paula said fundraising efforts for the Trust are never-ending and said their greatest desire is to support international research projects that aim to find a cure for DMD.

The Trust, which is 100 percent volunteer-based, is holding a number of fundraisers before the end of the year to help fund DMD research, including a Christmas draw with cash and PS5 prizes and a Magical Winter Ball in Malahide. The charity is also holding a Monster Truck and Tractor Run in Galway, which Archie "would have relished so much".

The Trust has additionally held two Duchenne International Conferences at Croke Park and aims to hold a similar event next year.

Paula said people are "so compassionate and kind" when they hear of the story of three brothers all fighting against the same terminal illness.

"Often our biggest challenge is to get the message to people,  in the hope they might choose to support our work. Having one sick child is desperately challenging but having three children that are terminally ill is just so devastating. You would not wish it on any family.  We are just so grateful for every dollar, euro, or pound that is gifted to The Trust."

To find out more about the Join Our Boys Trust or to donate to the campaign, click here. Alternatively, you can support Ben Banaghan's run by clicking here.

Irish woman in Boston shares words of wisdom after turning 100