Roscommon teen, the eldest of three terminally-ill siblings, has died

Archie Naughton,16, sadly passed away at Dublin's Mater Hospital on July 7, his parents Paula and Padraic Naughton have confirmed. He is survived by his two brothers, who also have Duchenne Muscular Dystrophy. 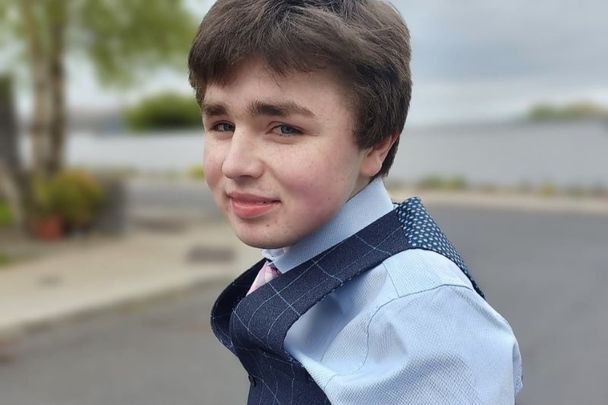 Archie Naughton, 16, has been described as "irreplaceable" by his parents Paula and Padraic Naughton.

The Roscommon teenager died in the Coronary Care Unit of Dublin's Mater Hospital on Thursday, July 7, his parents said in an emotional death notice.

"He will be very sadly missed by his heartbroken family, his grandmother Nana Kerr, his uncles, aunts, cousin, neighbors, schoolmates, his many good friends, and by all those who supported him throughout his illness," the notice continued.

Archie will repose at Smyth's Funeral Home in Roscommon between 3 and 6 pm on Saturday, July 9, while his funeral will take place at 11 am on Monday, July 11 at the Sacred Heart Church followed by burial in St. Coman's Cemetery.

Those unable to travel to Roscommon can watch the funeral via live stream.

Paula Naughton told the Irish Independent that she and her husband Padraic had been praying for a miracle in the hours before Archie's death, adding that he had been in a critical condition in the Mater with his heart failing.

She said all three of the boys had been diagnosed with DMD in November 2012 and said she accepted that the three brothers would "eventually die".

"The average global life expectancy is mid-20s but, unfortunately, children as young as six have died from heart failure caused by the disease," Paula told the Irish Independent.

She said DMD was the most lethal genetic disorder diagnosed in young children, affecting one out of every 3,500 baby boys born around the world.

Paula and Padraic, both nurses, set up the Join Our Boys fundraiser to raise money for their three children and raise awareness about the condition.

The campaign has raised enough money over the past ten years to enable Padraic and Paula to build a home suitable for three children in wheelchairs in addition to "hundreds of thousands of euros" toward research.

They said they received no funding from the state to build the house.

They have also called on Taoiseach Micheál Martin, and the ministers responsible for health, disabilities, housing, and youth to do more to help those with DMD in Ireland.