The Ancient Order of Hibernians (AOH) hosted a special Gaelic Mass at St. Barnabas Church in New York on October 2, which was streamed to viewers worldwide. 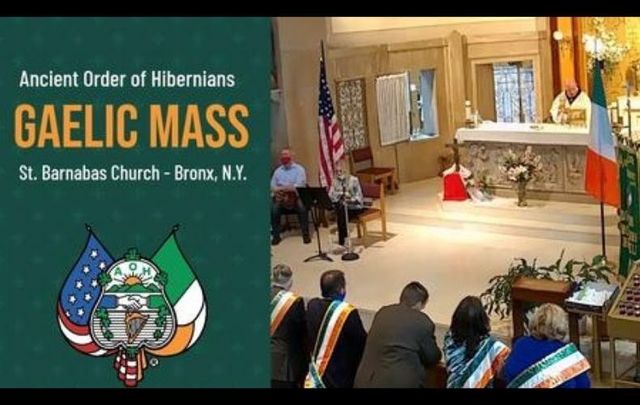 The AOH's Gaelic Mass, streamed on October 2, had viewers from across the country as well as in Ireland. AOH Bronx County Division 3, Facebook

It was Gaelic Mass day last Saturday as viewers from as far away as Texas, California, and Ireland itself joined Hibernians wearing sashes and medallions, Irish community groups, Irish speakers, and parishioners for a Mass said in Irish by Father Brendan Fitzgerald at St. Barnabas in Woodlawn on October 2.

This year, the Gaelic Mass included a special remembrance of the 10 Irishmen who gave their lives on the hunger strike which ended on October 3, 1981.

A press release from the Bronx AOH reported: “The day began with an announcement by County Legislator David Tubiolo that Westchester had officially declared Gaelic Mass Day in a proclamation which memorialized the 1981 hunger strikers, and the Irish Mass rocks where outlawed Masses had been said in secret by outlawed priests, under English Penal Laws in Ireland.

"Booklets containing Irish English translations of the prayers were handed out to those coming into St. Barnabas, or downloaded by viewers on Facebook. These booklets allowed everyone to follow the prayers in English as they listened to the Irish words.

“In his sermon, Father Fitzgerald said, ‘Today we are remembering the hunger strikers whose lives and sacrifices are so dear in our memories…we are also celebrating more than a language and culture. We are celebrating a tremendous gift of faith, handed down by generations who paid a price and suffered so that we could know this gift.

“’Our faith and Irish culture are so interwoven that without God we would have to remake how we say many things in Irish. Today we  also acknowledge the heroic sacrifice of our ancestors who gathered at Mass rocks deep in the woods or forests, putting their lives on the line simply to hear Mass in their own language in defiance of Penal Laws.’

“Galvin said, ‘Gaelic Mass day has gone from a local Bronx AOH event to become a national event with AOH members across the country wanting to be a part of it. The parish, AOH, and LAOH nationally, Irish government, local Irish community groups, Irish language clubs, and musicians volunteered help.

"This year, coinciding with the 40th anniversary, it was fitting to remember the 1981 hunger strikers and their great legacy, a small part of which was inspiring a new impetus for the Irish language.’”

You can watch back on the Gaelic Mass hosted at St. Barnabas Church on Saturday, October 2 here: