The AOH is calling upon NYC Mayor de Blasio to "publicly condemn the increasing acts of violence against the Catholic Church in New York City." 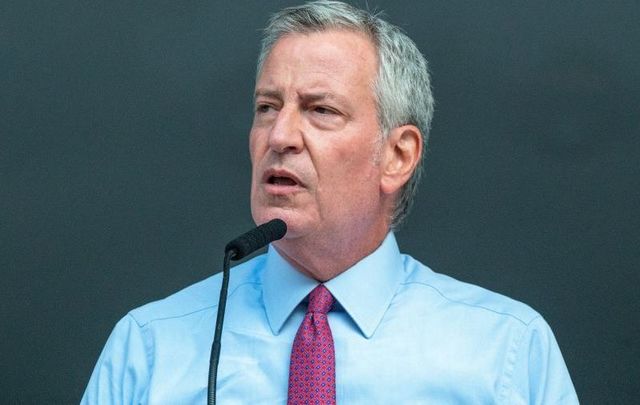 A statement issued on August 11 by James Russell, the Catholic Action Chairman of the AOH, reads: "The New York State Ancient Order of Hibernians (AOH) calls upon both Mayor de Blasio to publicly condemn the increasing acts of violence against the Catholic Church in New York City as exemplified by the vandalism this past weekend at Immaculate Conception of the Blessed Mary Church in The Bronx. Clothes were put in front of the statue of Our Lady and set on fire."

"The attack on the Statue of Our Lady is only the latest in a disturbing rise in hate crimes targeting Catholic Churches in New York City," the AOH statement says.

"On July 17, a statue of the Blessed Mother, and St. Therese of the Little Flower at Our Lady of Mercy Church in Forest Hills, Queens was destroyed.  This was the second attack on the statues in a week.

On 7/17/21, at approx. 3:30 AM, an individual approached Our Lady of Mercy church, at 70-01 Kessel St, removed two statues and repeatedly slammed them to the ground causing them to break. ☎️ 1-800-577-TIPS@NYPDShea
@NYPDDetectives @NYPDchaplains @NYPD112Pct @QueensDAKatz pic.twitter.com/AQIHCgRFhK

"On May 28, the Blessed Mother statue at St. Adalbert’s in Queens was broken into pieces.

"On May 17, a Crucifix was vandalized at St. Athanasius Roman Catholic Church in Bensonhurst.

"The Mayor has been very quick to publicly and rightly condemn acts of faith targeting other faiths. However, we can not help but notice the disturbing, deafening silence from the Mayor concerning these heinous acts of hate targeting Catholics.

"We urge our members to contact Mayor Bill de Blasio and let him know that there can be no tolerance for acts of hate targeting people of faith, nor can there be a double standard of outrage.

This is the second time in recent months that the AOH, the largest and oldest Irish Catholic organization in the US, has urged Mayor de Blasio to condemn such attacks.