Anti-vax Irish American Cardinal on ventilator due to coronavirus

Cardinal Raymond Burke, who described COVID-19 as the "mysterious Wuhan virus" in a sermon last December, is currently on a ventilator. 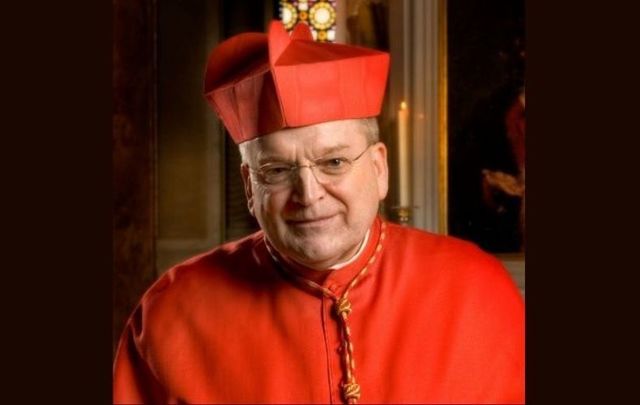 Irish American Cardinal Raymond Burke remains in serious but stable condition after being admitted to the hospital with COVID-19 earlier this week.

Burke "remains sedated and on a medical ventilator" as of August 17, according to a press release from Rev. Paul N. Check, the Executive Director at the Shrine of Our Lady of Guadalupe in Wisconsin.

Medical decisions for the Cardinal are being handled by his family with his team of doctors. The Cardinal has received the Sacraments from priests nearby to him and there are several relics in his room.

Cardinal Burke remains in serious but stable condition. He is receiving excellent medical and sacramental care. Please pray for his recovery, particularly through the intercession of Our Lady of Guadalupe, St. Joseph, St. Juan Diego, and St. Rocco. https://t.co/KdeocF6zRp

The latest update from the Cardinal's team comes just a week after it was announced on Twitter that Cardinal Burke, who has previously described COVID-19 as "the mysterious Wuhan virus" and alleged that there was a movement to micro-chip people, had tested positive for coronavirus:

Praised be Jesus Christ! I wish to inform you that I have recently tested positive for the COVID-19 virus. Thanks be to God, I am resting comfortably and receiving excellent medical care. Please pray for me as I begin my recovery. Let us trust in Divine Providence. God bless you.

On August 15, it was announced that Cardinal Burke had been admitted to the hospital:

Cardinal Burke has been admitted to the hospital with COVID-19 and is being assisted by a ventilator. Doctors are encouraged by his progress. H.E. faithfully prayed the Rosary for those suffering from the virus. On this Vigil of the Assumption, let us now pray the Rosary for him.

A report in the St. Louis Post-Dispatch said the cardinal, who lives in Rome and is prefect emeritus of the Apostolic Signatura, became ill while visiting Wisconsin, where he was raised and was bishop from 1994 to 2005.

Last December, Burke echoed former US President Donald Trump by describing COVID-19 as the "mysterious Wuhan virus" during a sermon in Wisconsin and said that certain forces were using the virus to "advance their evil agenda".

"These forces tell us that we are now the subjects of the so-called ‘Great Reset’, the ‘new normal,’ which is dictated to us by their manipulation of citizens and nations through ignorance and fear," Burke said.

"Now we are supposed to find in a disease and its prevention the way to understand and direct our lives, rather than in God, and his plan for our salvation."

Earlier, in May 2020, Burke, speaking at the Rome Life Forum, said: "There is a certain movement to insist that now everyone must be vaccinated against the Coronavirus Covid-19, and even that a kind of microchip needs to be placed under the skin of every person, so that at any moment, he or she can be controlled regarding health and regarding other matters which we can only imagine as a possible object of control by the state."

He added: "It must be clear that vaccination itself cannot be imposed in a totalitarian manner on citizens.

Cardinal Burke, whose parents were from Cork and Tipperary, has been a frequent visitor to Ireland and regularly attended the annual Fota International Liturgy Conference in Cork which he opened in July 2014.

He served as Archbishop of St. Louis from 2004 until 2008 before his appointment at the Vatican’s Supreme Tribunal of the Apostolic Signatura. He was later removed from this post by Pope Francis in 2014.