Fungie is that you? Pod of fifty dolphins spotted off West Cork coast

The video captures a large pod of dolphins entertaining onlookers in West Cork and has been viewed more than 76,000 times online. 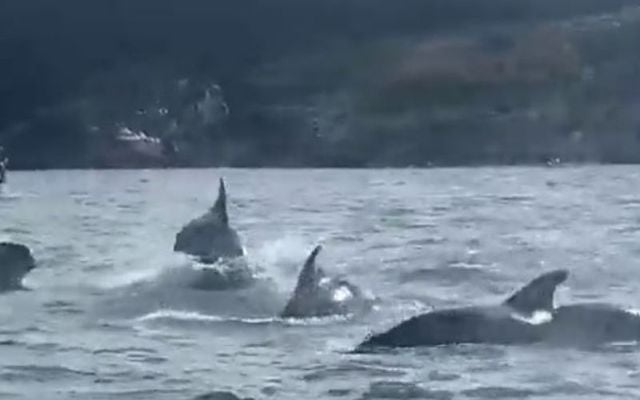 A pod of fifty dolphins have been spotted off the coast of West Cork by delighted onlookers.

The video of the bottlenoses was posted to Twitter by journalist Flor McCarthy and has been viewed more than 76,000 times.

Ms MacCarthy told the Irish Examiner that her husband and son spotted the pod of dolphins while they were out on the wat, and shortly after she joined them they were "surrounded".

"Word spread and there were about ten boats eventually, mostly families with kids," she said.

"Some were sailing, those with engines turned them off or put into neutral and we drifted with dolphins.

Highlight of the summer. Must have been 50 dolphins in this pod this evening! Wait ‘til the end….just wait! #Baltimore #westcork #❤️ #sherkin pic.twitter.com/22YZq6bSQI

"It looked like an end-of-summer spectacle that they had been choreographing for weeks."

Ms MacCarthy says they were "mesmerized" by the synchronization of the dolphins.

"We’re on the water here all summer between Baltimore and the islands of Sherkin, Heir Island, Cape Clear, and Horse Island and we see dolphins here often.

"This is the first time we’ve ever seen them in such numbers within Baltimore Harbour."

A magical moment of the spectacle comes at the very end of the video when most of the dolphins come up to the surface all at once.

1. Most pods contain anywhere from 2 – 30 dolphins depending on the species and the situation, however, there are occasions when pods gather with other pods to form superpods of 100 or even several thousand dolphins.

2. Bottlenose dolphins have 72-104 teeth and only get one set of teeth for life.

3. Dolphins communicate using an array of vocalizations such as clicks, whistles, and squeals