The shocking footage was uploaded to TikTok three days ago, where it has been viewed more than two million times and liked more than 800,000 times. 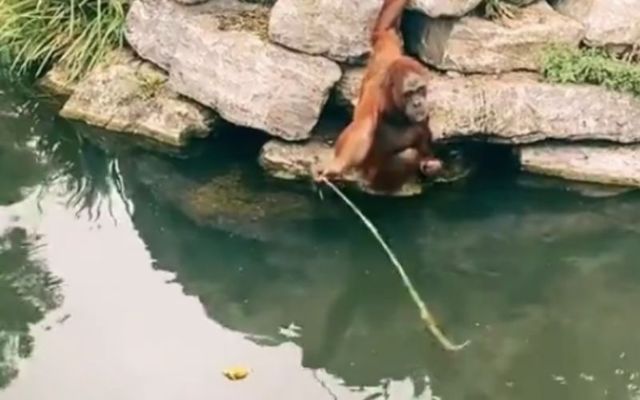 The Orangutan fishes a teddy bear out of the water before ripping it in half. @Laur_7 TikTok

An orangutan at Dublin Zoo has gone viral after tearing a teddy bear to shreds in front of a crying child's eyes.

The shocking footage was uploaded to TikTok three days ago, where it has been viewed more than two million times and liked more than 800,000 times.

Posted by TikTok user Lauren Douglas, the footage captures the animal retrieving a teddy bear from the water with a long piece of grass after a child had accidentally dropped it. The child can be heard crying in the background of the video while the orangutan retrieves the lost teddy.

The animal ostensibly climbed above the enclosure in order to drop the teddy bear back to the child.

However, it soon became apparent that the orangutan had not climbed above its enclosure to charitably return the teddy to the sobbing child.

"Today we went to Dublin Zoo," Douglas said in the viral video. "While visiting the orangutans, a child dropped their teddy into the water.

"The orangutan broke off some grass and tried to get the teddy. It eventually got it out and it looked like it gave it a kiss.

"When it began to climb up, everyone thought it was going to drop it down to the child," she continued.

"But instead it ripped the teddy apart dropping the fluff down onto the crying child. RIP Teddy."

I am screaming at this tiktok about the orangutan at Dublin zoo, wait for the end hahahaha pic.twitter.com/BjpiQmJkYA

The viral footage has also been shared on Twitter, where it has been viewed a further 170,000 times.