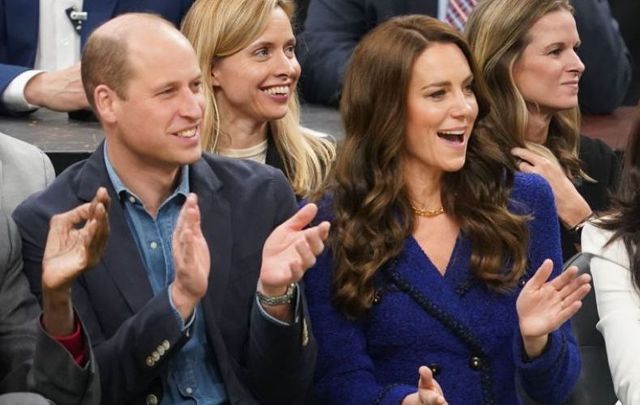 Prince William, Prince of Wales and Catherine, Princess of Wales, watch the NBA basketball game between the Boston Celtics and the Miami Heat at TD Garden on November 30, 2022 in Boston. Getty

Prince William and Catherine attended an NBA game between the Boston Celtics and Miami Heat at the TD Garden in Boston, Massachusetts on the first night of their US visit on Wednesday.

The royal couple, seated next to Massachusetts Governor-elect Maura Healey and Boston Mayor Michelle Wu, stood for the US national anthem before the game.

However, the crowd started booing when they were introduced by a stadium announcer and shown on the big screen while other fans in the crowd could be heard loudly cheering "USA, USA."

Prince William and Princess Kate on the Jumbotron at TD Garden followed by a smattering of boos and USA chants pic.twitter.com/Pf9TVrsvSk

Before the game, the royals met members of the 'Celtics family', including representatives of the Boston Celtics Shamrock Foundation, which provides grassroots programming and funding to local organizations serving at-risk or at-need populations.

The Boston Celtics’ name was inspired by the Original Celtics, a well-known basketball team created by Irish immigrants in New York earlier in the 20th century.

Fantastic to celebrate the arrival of #EarthshotBoston2022 in the city and meet members of the community doing amazing things to protect and restore our planet. pic.twitter.com/y4XdCRUk29

— The Prince and Princess of Wales (@KensingtonRoyal) December 1, 2022

Earlier yesterday evening, The Prince and Princess of Wales attended the launch of the Earthshot Prize, which is awarded to winners each year for their contributions to environmentalism.

In a speech at the launch, Prince William thanked Boston and President John F. Kennedy, particularly his famous 'Moonshot' speech, for inspiring the creation of the Earthshot Prize for fighting climate change.

The couple arrived in the US amid controversy at Buckingham Palace this week. On Wednesday, one of King Charles’ top team members resigned after domestic abuse activist Ngozi Fulani claimed that she was asked racially loaded questions about her heritage and background by the palace aide.