Oscar Smith, 17, from the Isle of Skye off the coast of Scotland, took on the challenge to highlight "how important soil health is". 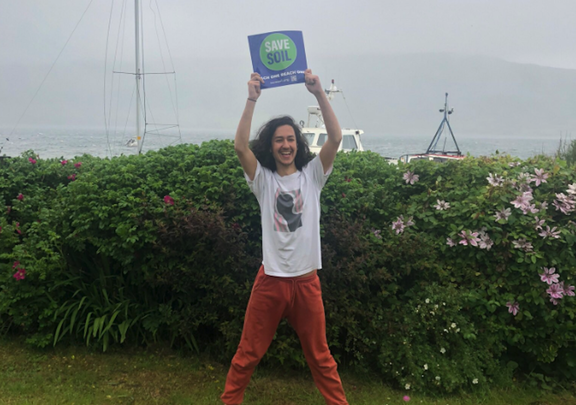 A teenager from a Scottish island intends to cycle more than 900 miles across the UK and Ireland to raise awareness about soil health.

Oscar Smith, 17, from the Isle of Skye off the coast of Scotland, took on the challenge to highlight "how important soil health is".

The 17-year-old has never cycled more than 50 miles before but set off on the two-week journey on November 20 along with a group of 10 core riders who will all cycle at least 150 miles each.

Smith is part of the Cycle for Soil campaign created by Save Soil, an ecological movement aiming to educate the world about the importance of soil in sustainability.

Smith is the only person taking on the full 900-mile challenge and said he wanted to put himself on the line.

"Also, because most people are unaware about soil and how important it is for our wellbeing and the wellbeing of the planet.

"So, I really want to demonstrate that importance by doing something extremely challenging for my age, and something that I’ve never done."

Smith said he started volunteering for Save Soil after coming across a video on YouTube about the ongoing soil crisis.

"The issue of soil degradation is one of the least talked about issues but also probably is the most urgent and important issue that our planet faces because across the world 52% of the agricultural soil has already been degraded and 95% of humanity’s food comes from the soil.

Save Soil says 850 billion tons of carbon dioxide will be released into the Earth's atmosphere if the world's soil is not revitalized. The organization is also calling on governments around the world to implement a 3-6% organic soil requirement in their countries.

Smith and the core riders will cycle 60 miles a day for the duration of the challenge with no long breaks. They are starting their cycles at sunrise and making stops at farms, universities, and organizations that are championing soil health.

The cycle began in Edinburgh on November 20 and reached Dublin on November 25. It will end outside the UK Parliament buildings in London on December 5 to mark World Soil Day.