US President Joe Biden made reference to Ireland, his Irish American roots, Sinn Féin, and Seamus Heaney during his official visit to Israel this week. 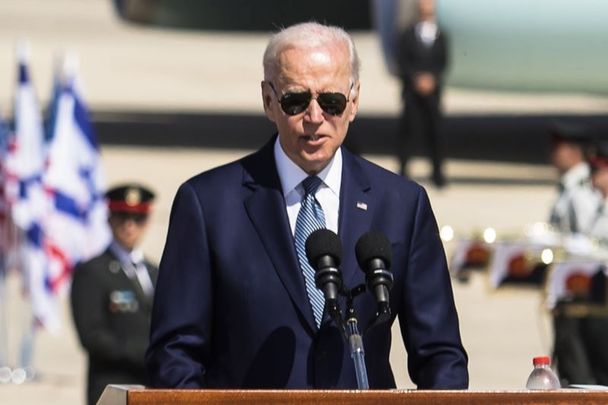 July 13, 2022: President Joe Biden speaks during the welcome ceremony during his visit to Israel in Lod, Israel. Getty Images

US President Joe Biden again leaned on his Irish American roots during his official visit to Israel this week.

Biden attended a reception in Jerusalem hosted by President of Israel Isaac Herzog on Thursday, July 14, where he received the Israeli Presidential Medal of Honor.

Opening his remarks, Biden said: “President Herzog, it’s wonderful to be with you again and an honor to be with so many familiar faces out in this garden.

“A great day for the Irish,” Herzog said.

Herzog’s grandfather Yitzhak HaLevi Herzog, who was born in Poland and moved to the United Kingdom as a child, served as rabbi of Belfast from 1916 to 1919 and was appointed rabbi of Dublin in 1919. In 1921, he became the first Chief Rabbi of Ireland, a role he remained in until 1936.

Herzog was a fluent Irish speaker and was a supporter of the Irish republican cause during Ireland’s War of Independence, leading to the moniker “the Sinn Féin Rabbi” or “the IRA Rabbi.” His son Chaim Herzog, who grew up on Dublin’s South Circular Road, went on to become the sixth president of Israel.

Later in his remarks on Thursday, Biden, as he is inclined to do, made reference to Irish poet and Nobel Prize winner Seamus Heaney.

“Since I know that you and I share a connection, as I said, to Ireland, I hope you forgive me for ending by quoting an Irish poet, Seamus Heaney. And he wrote — in ‘The Cure at Troy,’ he said: ‘History says, Don’t hope on this side of the grave.  But then, once in a lifetime, that longed-for tidal wave of justice rises up, and hope and history rhyme.”

On Friday, Biden again touted his Irish American roots while speaking at an event at the East Jerusalem Hospital.

He said: "Before I begin, I’d like to say that — there’s an old expression: 'Hope springs eternal.'

“My background and the background of my family is Irish American, and we have a long history of — not fundamentally unlike the Palestinian people with Great Britain and their attitude toward Irish-Catholics over the years, for 400 years.

“But my colleagues, when I was a US Senator, used to always joke with me that I was always quoting Irish poets when I was on the floor of the Senate. And they thought I did it because I’m Irish.

“That’s not the reason I did it; I did it because they’re the best poets in the world.

“There’s a great poem from 'The Cure at Troy,' a paragraph. It goes like this — and it’s classically Irish, but it also could fit Palestinians. It says:

'History teaches us not to hope

Of justice rises up,

And hope and history rhyme.'

Aside from this week in Israel, Biden has invoked Heaney's "The Cure at Troy" numerous times: He quoted the famous Irish poem after winning several primaries in March 2020; He used it in a presidential campaign video in October 2020; and in January 2021, it was featured during his inauguration celebrations.