Joe Biden again quotes Seamus Heaney, this time reciting his "The Cure at Troy" in his latest campaign video. 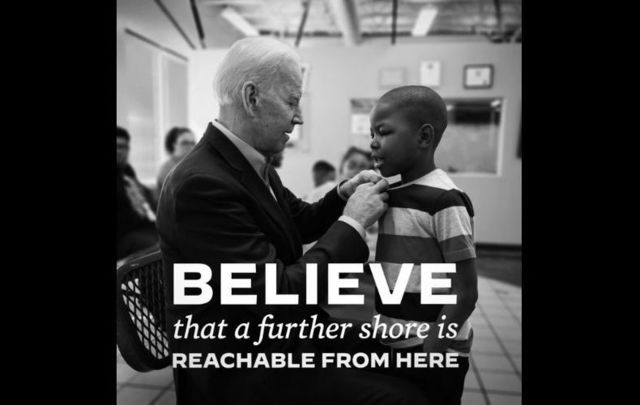 Joe Biden has frequently recited passages from Heaney's "The Cure at Troy: A Version of Sophocles' Philoctetes." Joe Biden, YouTube

Biden recited a passage from Heaney's "The Cure at Troy: A Version of Sophocles' Philoctetes" in his latest appeal for votes in a video shared across social media on Thursday morning.

The presidential candidate read a passage from the play over images of several seismic events from this year, including Black Lives Matter protests and the COVID-19 pandemic. The video also included images from a protest outside Trump Tower.

Biden has frequently recited extracts from The Cure at Troy and quoted it during his acceptance speech at the 2020 Democratic National Convention.

He posted his latest recital of Heaney's famous work on Twitter alongside an extract from the poem which reads:

"History says, Don't hope
On this side of the grave,
But then, once in a lifetime
The longed-for tidal wave
Of justice can rise up
And hope and history rhyme."

"History says, don't hope
On this side of the grave.
But then, once in a lifetime
The longed-for tidal wave
Of justice can rise up,
And hope and history rhyme."
- Seamus Heaney pic.twitter.com/7nB1ytYlvm

Heaney's work has also been quoted by former President Bill Clinton, who recited it on his famed visit to Derry at the beginning of the Peace Process in Northern Ireland in 1995.

The Irish poet was drawn to the conflict at Troy because of its resonance with the Troubles in Northern Ireland and his verse speaks of a "tidal wave of justice" rising up to inspire both change and hope.

However, it was also inspired by the fall of the Berlin Wall in 1989 and the anti-apartheid movement in South Africa at the beginning of the 1990s.

Heaney wrote the play in 1990 when the conflict in Northern Ireland was at a fever pitch and his own hope for peace in the region was at a low ebb. The poet warns not to wait around for hope and said in an interview years later that hope is hard-won.